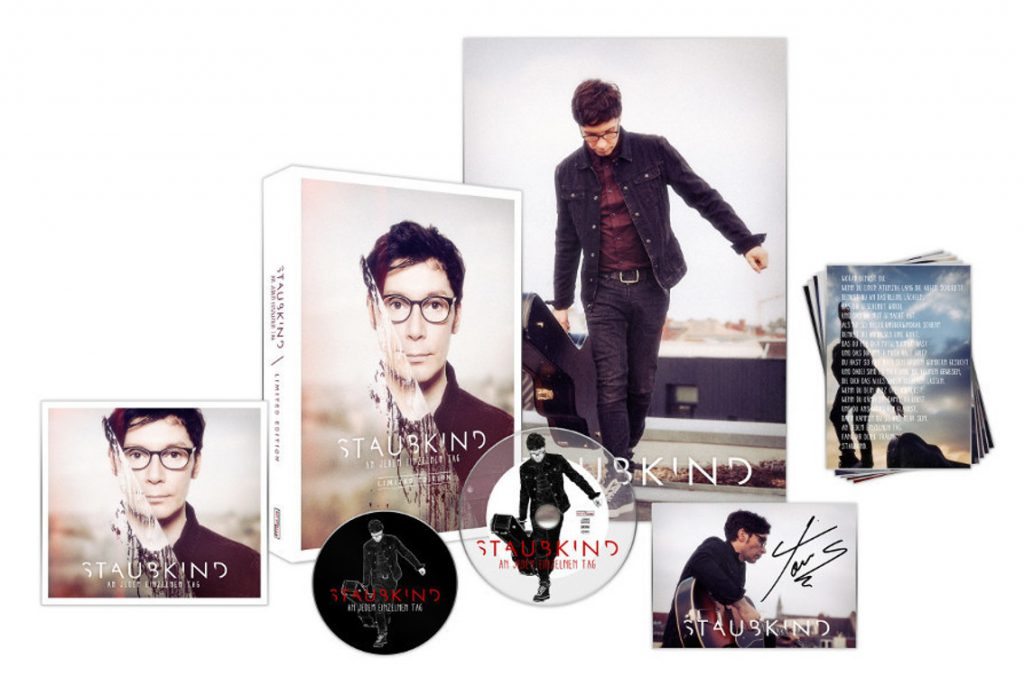 The brand new album “An jedem einzelnen Tag” by the Berlin based gothic rock pop act Staubkind will be out by the end of March. It’s the band’s fifth long player and was produced by Henning Verlage (Unheilig) and Ingo Politz (Silly, Silbermond, Joris).

It set furthermore contains a hand-signed autograph card, a poster, a sticker and a lavish postcard set as further exclusive content.

Louis Manke, a singer and guitar player from Dresden, founded the project Staubkind in 2004. In the same year, the first single “Keine Sonne” and the debut album “Traumfänger” were published on the Berlin independent label Fear Section of the singer and musician Chris Pohl. The rest is history. The line-up these days consists of Sven Louis Manke, Daniel Lindenblatt, Friedemann “Friedel” Mäthger, Sebastian “Bassty” Scheibe and Henrik Böhl.

Since you’re here … … we have a small favour to ask. More people are reading Side-Line Magazine than ever but advertising revenues across the media are falling fast. And unlike many news organisations, we haven’t put up a paywall – we want to keep our journalism as open as we can. So you can see why we need to ask for your help. Side-Line’s independent journalism takes a lot of time, money and hard work to produce. But we do it because we want to push the artists we like and who are equally fighting to survive. If everyone who reads our reporting, who likes it, helps fund it, our future would be much more secure. For as little as 5 US$, you can support Side-Line Magazine – and it only takes a minute. Thank you. The donations are safely powered by Paypal.
Tags: Berlin, Chris Pohl, Fear Section, Louis Manke, Staubkind