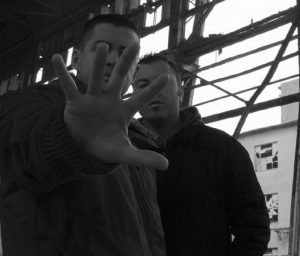 Robert Gajdos aka Lord Sauron and Peter Rybar aka Ryby both set up dISHARMONY during the early millennium years. The Slovakian duo released an impressive number of productions, which have been always driven by a real sound intelligence and truly passion for sound creation. Their latest album “Fragments Of Time” has been released late 2016 on Ryby’s own label Aliens Production and simply confirmed the talent of this band.

Q: I remember you once said that you don’t care about describing your music, but that an album ‘is a reflection of what we have been feeling in that moment’! So what did you feel when composing “Fragments Of Time”?

Disharmony: Music is not a science and there’s no philosophy behind. Since we have always wanted to do it our own way it always has been a certain form of expression from a personal kind of music value. “Fragments Of Time” is for us the next phase and of course the piece of life that we have crossed by creating it. Certainly, it contains very much of our emotions as well as musical positions that we have missed in previous search. For sure this album sounds like dISHARMONY although by our own opinion it is completely different. We are still trying to create our own world, which we offer to you mortals …

Q: How do you transpose this ‘own world’ and emotions into songs?

Disharmony: Well … we would like to know all mysteries of the universe. We don’t have a clue, however, if you don’t have the stone inside you and if you perceive the world around you and you know the magic tricks with the boxes that knows how to give all kinds of sounds you’ll find that right position how to create a concept that will have some story. Without emotions, this genre can’t be done. If you don’t have them then you have nothing to say. Certainly, we’re not dying, but also we won’t give out the message about healthy eating and how you should grow up your children. We’re only gentlemen in an advanced age with a little more imagination …lol

Q: Listening to Disharmony I feel a real passion for sound creation. Where does that come from and how do you create your sounds and noises?

Disharmony: Nicely described. It’s not always clear to us exactly how this occurs, but we’re always trying to make the basis so we don’t get lost in it, and to be passionately beautiful. Then comes the next stage, which is that in that beauty you have to also show the worse what will kick you and will take you sometimes to the edge of the abyss. We have never done a mess or even something louder that could be hard to handle. Noise and machinery must be there, because this all is dISHARMONY.

Q: You’ve been working now for years together. Do you see an evolution in your sound creation and eventually new potential sources of inspiration?

Disharmony: For sure. The fact that we are together makes our music the way it is. Of course, our own tastes change and we’re influenced by music. It’s good when a project is moving somewhere forward and generates. We’re feeling certain connection with other genres, but in the core, that’s always us. We don’t put any pressure on ourselves and have no pretention. We like to do what fullfil us in the music. We’re not rushing anywhere and when we feel a need to get something out we make an album.

Q: Ryby, you’re running your own label Aliens Production so why did Disharmony released 3 albums on Tympanik Audio and what do you think about the loss of this label?

Disharmony: Everything has its own beginning and its end. I know how it is today to release music when you spent that much energy and time in it, but just in a few hours this work is available on a Russian website for free so it feels like all the enthusiasm and hard labor around it ends in the toilet.

I am not surprised Paul has decided to stop and he for sure had his reasons for this. Tympanik Audio had an impact on this musical community. The label had its own taste and had a strong dimension. I will miss Tympanik Audio, but we’re proud that we have been part of it, but life goes on…

Q: What will be the next step in the career of Disharmony and do you’ve further plans for Oxyd?

Disharmony: Ohhh.. It’s too fast talking about it right now. We recently have released “Fragments Of Time” so now we have to wait if something will come up. For sure we’re getting older and we will drain all around ourselves. If there will be a process for dISHARMONY we’ll let you know about it.

Oxyd is probably the closest to what should be woken up. So, it will be the next concept that we will try to reactivate since it sleeps for a longer time and it needs to be kicked. I’m confident we gone make it.