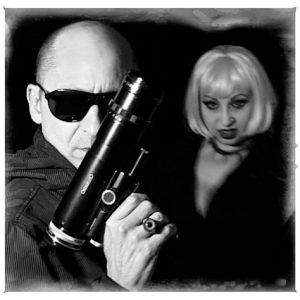 Philippe Fichot and Eliane P. strike back with their new opus “Baroque Equinox”, which has been released on Trisol. The French duo are praised and recognized for their very personal dark-electronic style, which they’re now dealing with for more than 40 years. I always experienced the French project as a ‘total concept’, which is much more than simply music and a so-called fetish image. I got in touch with Philippe Fichot for a chat about the new work and the artistic approach behind the music.

Q: After more than 40 years of involvement, having released an impressive number of productions, what means this new Die Form album to you?

Philippe: Each new project (audio or visual) arises from an urgency, a compulsive need. It’s my way of existing, communicating, of being alive. It’s also a stage of my life and a form of therapy.

We always try to reinvent ourselves and to go beyond our limits, to dig more deeply within the layers of memory and to find connected points with the present. Always exciting, but sometimes painful.

Q: What have been the main sources of inspiration to compose “Baroque Equinox” and what is the album all about?

Philippe: Sources of inspiration are numerous, because the project was built over several years. There’s always this duality between the elements, between day and night, where everything could change towards lightness or darkness, towards silence or chaos, towards order or disorder, love or hate.

I was also inspired by Courbet’s work (“L’Origine Du Monde”), Man Ray, Max Ernst… and by the woman’s genitals/sexual anatomy. And I was touched and affected by the events and situation worldwide.

Q: So there clearly is no link with the “Bach Project”-album you released a few years ago now and which was into baroque music?

Philippe: The title has no direct link with baroque music, but rather with an aesthetic vision, forms, colors, feelings… which stray from usual paths and conventions, like a kaleidoscope with minute details, sometimes dissonant and excessive.

Q: Sound-wise I experienced “Baroque Equinox” as getting back to a more ‘experimental’ and ‘abstract’ composition with a real important focus on sound creation; a bit like a sonic collage. What’s your perception of this work?

Philippe: I don’t find this album that experimental. It is more rich and varied, with multiple facets and ‘trompe l’oeil’ compositions maybe destabilizing for the listener. Some sounds and songs follow on from my solo-project Musique Concrète, while others are more rhythmic and melodic, sometimes minimalist, sometimes teeming.

My idea was to present a synthesis of all these years of research, as well pervaded with our experiences/background as our perception of present time.

Q: The ‘artistic’ aspect has been always an important part in the work of Die Form and I directly link it to the live performances, the image, your pictures and the artwork… which all are visual elements so what means ‘artistic beauty’ to you when it comes to the music, the notes, song structures etc?

Philippe: It can be seen and felt in this way. Creation can be a form of resistance. But there’s also a part of reflection on memory and usefulness of creation in the world as it is and as it becomes/emerges.

Philippe: This can be understood as the image of a lifelong/endless search (‘Ad Infinitum’) for beauty and perfection, limitless/unrestricted and borderless, as an impossible love until death.

Philippe: I think there’s more artistic creations in all areas, in every directions and every one can expose/present one’s ideas and work to the world. I hope that freedom of expression will survive for future generations.

Since you’re here … … we have a small favour to ask. More people are reading Side-Line Magazine than ever but advertising revenues across the media are falling fast. And unlike many news organisations, we haven’t put up a paywall – we want to keep our journalism as open as we can. So you can see why we need to ask for your help. Side-Line’s independent journalism takes a lot of time, money and hard work to produce. But we do it because we want to push the artists we like and who are equally fighting to survive. If everyone who reads our reporting, who likes it, helps fund it, our future would be much more secure. For as little as 5 US$, you can support Side-Line Magazine – and it only takes a minute. Thank you. The donations are safely powered by Paypal.
Tags: Die Form, Trisol