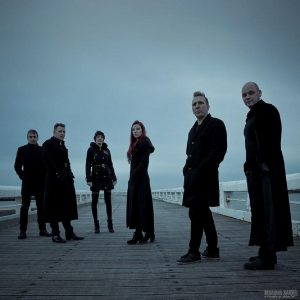 Der Klinke is a Belgian formation inspired by the good-old 80s new-wave music. Set up in 2009 they released three albums on the German label Echozone. They now strike back with a new opus entitled “The Unexpected”, which also is their first album on the Belgian company Wool-E-Discs. I asked a few questions to the band’s front man Geert Vandekerkhof aka ‘Chesko’.

Q: How would you introduce Der Klinke to music lovers who aren’t that familiar with your band? What have been the main facts since your debut (2009) and most relevant news?

Chesko: Well, Der Klinke is a Belgian darkwave band with a very own and recognizable sound that isn’t a carbon copy of something else, but the sound is best compared with bands such as Poesie Noire. Main facts were of course the release of all our albums, four so far and we’re preparing ourselves to celebrate our 10th anniversary next year.

Q: A few months ago now you released the new album “The Unexpected”, which has been received a rather positive way by the media. What makes this album ‘better’ than your previous productions and what is it all about?

Chesko: It isn’t better, but our music took some time to get accepted and appreciated I guess. There was however 4 years in between “The Gathering Of Hopes” and “The Unexpected”  On the cover of “The Gathering” we had all children on it.. Then all of the sudden one of them, the daughter of our bass player had to fight against cancer, all of our personal lives have changed too, so “The Unexpected” is something we can’t really describe, but it has lots of the emotions from those 4 years on it.

Q: I think the new work reveals a great balance between guitar play and electronic arrangements while the global production became more mature. Tell us a bit more about the writing and recording of the album? What were the aspects you tried to improve, maybe inject and what kind of album did you want to accomplish?

Chesko: I never wanted to improve anything on purpose, we really do like the other albums just as much, but of course we all evolve and so does the techniques and equipment we use. The writing and recording process has stayed the same, and we never know how an album will sound like before it is actually finished. “Mr.Pumpkin” for example was already recorded for “The Gathering Of Hopes”, but it didn’t fit in that album so now was the time to include this. We are busy with some new things and one of them is a song that we wrote in 2010, even before “Square Moon” was released. We just see what happens, how as song sounds like when everyone had his input in it..

Q: Your sound is clearly inspired by the 80s and I’m always wondering what made this decade and especially new/cold-wave music that special for contemporary artists?

Chesko: It was the successor of the punk ‘No Future’ generation. While the punk movement was more rebellious the post-punk or new-wave found a way to chill on the thought of not having a future hahaha. There was the cold war going on, the Falklands, huge economic crisis and unemployment. The punk movement made people not wanting to fit in or live according what is right or acceptable, and with the wave movement the youth was searching ways to really become someone unique instead of part of a mass. And all of this together, made it all fit in perfectly and now we are living in pretty much the same world.. unemployment, financial crisis, cold war etc…

Q: After having released three albums on the German label Echozone you now joined hands together with the ‘smaller’ Belgian label Wool-E Discs. Do you notice main differences between both labels (and countries) and what do you expect as band from a label today?

Chesko: No, we don’t feel lots of difference. In this scene you have to realize that music is all about passion. You can’t make a living out of it, at the contrary, it’s a hobby that costs a lot and this goes for both band as the one who is devoted to start a label. So the first thing in order to have a healthy relationship with your label is searching ways to invest together and split both the profits as the losses.

Q: “The Unexpected” (just like you 2 previous albums) has been released on CD- and vinyl format. What’s the importance for an artist to get his album on vinyl today and don’t you think it’s often just a collector’s item for the people buying vinyls?

Chesko: Well, people who know me know that I am and always have been a vinyl addict. So it was more something personal in the beginning, the cherry on the cake, to have my own music on vinyl. The vinyl pressing is something I have to pay out of my own pocket and glad more and more people are really switching to vinyl again. It does makes the music more real, perhaps not in pure audio quality, that depends on the equipment you use, but holding the sleeve, having the artwork at full size, reading all liner notes, lyrics,  it’s all part of the listening experience. And yes, vinyl is more a collector’s item because it will not lose its value. So vinyl is also a way of buying music and investing your money at the same time.