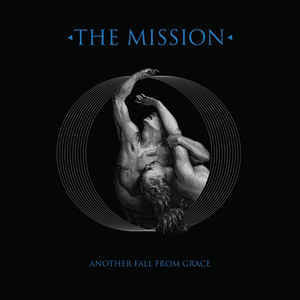 Out on a few weeks is “Another Fall From Grace”, a brand new The Mission album. It was produced by Wayne Hussey and Tim Palmer, who already produced the band’s 1986 debut album “God’s own Medicine” and 1990’s “Carved in Sand”.

Here’s what Wayne Hussey has to say about the new album: “For me, this new Mission album is the long lost missing link between The Sisters Of Mercy’s First & Last & Always and The Mission’s God’s Own Medicine, both albums of course that I was heavily involved in making. I set out this time with the intention of making an album that sounds like 1985.”

The deluxe version of the album contains the full album on CD, a bonus-CD with instrumental version of the album with the additional bonus remix track “Met-Amor-Phosis” (of which you can preview the original below) and a 93 minute DVD featuring never before seen footage from 1987 of The Mission performing at Elland Road, Leeds, supporting U2 at the Aston Villa Leisure Centre as The Metal Gurus and The Royal Court in Liverpool for the Hillsborough benefit gig, both from 1989, producer Tim Palmer’s home footage of the recording of “Carved in Sand”/”Butterfly on a Wheel” video, and the promo video for the new single “Met-Amor-Phosis”.

Below you can listen to the first single from the album: “Met-amor-phosis” featuring Ville Valo (HIM).

Since you’re here … … we have a small favour to ask. More people are reading Side-Line Magazine than ever but advertising revenues across the media are falling fast. And unlike many news organisations, we haven’t put up a paywall – we want to keep our journalism as open as we can. So you can see why we need to ask for your help. Side-Line’s independent journalism takes a lot of time, money and hard work to produce. But we do it because we want to push the artists we like and who are equally fighting to survive. If everyone who reads our reporting, who likes it, helps fund it, our future would be much more secure. For as little as 5 US$, you can support Side-Line Magazine – and it only takes a minute. Thank you. The donations are safely powered by Paypal.
Tags: All About Eve, Depeche Mode, Evi Vine, Gary Numan, Julianne Regan, Martin Gore, Sisters Of Mercy, The Mission, Ville Valo, Wayne Hussey