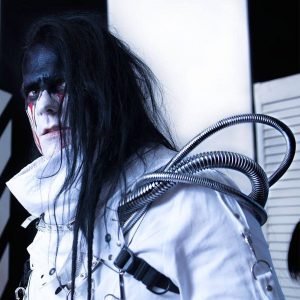 Set up in 2004 Australian formation Angelspit is now based in Los Angeles (USA). Driven by front man Karl Learmont aka ‘Zoog Von Rock’ Angelspit deals with a very own sound, which is mixing tortured electronics and furious guitar play. It sounds definitely electronic, but still punk-like. The least I can say is that Angelspit is a band with attitude! The latest album “Black Dog Bite” released on Black Pill Red Pill has been introduced as their most ‘highly produced album to date’. This is what Zoog von Rock has to say about the new work.

Q: Angelspit is a real prolific band, having released an impressive discography over the past 10 years. Where does this creativity comes from and what means the release of the new work “Black Dog Bite”?

Zoog: I am inspired by talking with Angelspit supporters. We all share similar struggles, and our conversations always sparks ideas for new music and lyrics. I am also inspired by music technology, and how each era has a different sound because of the technology available.

With “Black Dog Bite”’, I focused on the cyber-punk sounds of 1988 to 1992. I acquired  synths that where from to that era. I constructed the music as in a similar manor to how it was constructed then – it was a slow process, but a lot of fun!

Q: Angelspit is a band taking care for nearly all aspects of the production, but still for little details such as original trailers announcing the new album. There’s of course the sound, but also the image is important, the artwork, the live shows etc.. How comes you’re a kind of ‘control freak’?

Zoog: Hell yeah I’m a control freak! I am this way because it’s very difficult to find others who I can rely on. You only get one chance to make a first impression, so it’s got to be awesome – unfortunately not many people know this.

Many think that certain aspects of music/production/promotion ‘is not their job’. The truth is that every part of every process is your job. The responsibility is yours – not enough people understand this.

However, increasingly I am working with more people. I recently had the pleasure of working with Ruined Vibes – who specialize in vinyl, they helped me with putting it together. They also encouraged me to get inventive with the design of the record. It’s printed on 150g black & white splattered vinyl. It comes with a poster, 16 page zine, and each copy has a numbered Japanese style ‘Obi’. It looks awesome!

More on the vinyl here:

Q: I noticed you consider “Black Dog Bite” as ‘the most highly produced album to date’ and that’s a statement, which rapidly comes through. What makes this album that special and what are the elements you tried to improve, maybe change and/or innovate?

Zoog: Although the music was constructed with a late 80s/early 90s ethos, the final production followed the strict rules of modern dance music. Although the music is dirty, I produced it to be as clear as possible – so it could be played next to a club hit and still hold its ground yet sound sonically different and interesting.

“Black Dog Bite” is very minimalist – but the more space the music, the fatter and harder you can drive the sounds.

Q: You also seem to like composing music for soundtracks. Most artists dream of composing soundtracks so what’s the magic of a soundtrack and what’s your personal experience about it?

Zoog: Soundtracks are the best fun! I am blessed that several ANGELSPIT supporters are working on short films and have asked me to do their soundtracks. These movies are dark, action packed with a twist of horror – right up my alley!

ANGELSPIT’s sound design and writing process work perfectly with soundtracks. It is so much fun to use scraping metal or a screaming synth to underpin screen action.

Q: You’re also fond of remixes, but don’t you think remixes became something very common and sometimes a bit ‘cheap’ when an artist releases an EP or album featuring only remixes by other artists?! So what makes it that exciting and what’s your perception of a good remix?

Zoog: I have just launched the remix album for “Black Dog Bite” – it’s going to be awesome!

The trick to a good remix album is to have many different styles, and remix *ALL* the tracks from the original album. I always ask the remixers to alter the track as much as possible – change the structure, cut up the vocals, completely re-invent the music.

Q: What has been the impact of Angelspit’s success on your very own life and how does it feel to be a successful ‘artist’?

Zoog: ANGELSPIT has allowed me to live ‘outside the bubble’. I often ride peak-hour trains to help me re-connect with society. I work from home, I work all the time – 12 hours is a typical day, it’s often more. Usually 7 days a week, sometimes I get a day off.

There are always new problems and challenges with this ‘job’, and I need to have a fresh and inventive mindset to come up with the solutions. I am my own manager, so I am completely responsible for this to work. Although I don’t have time to go and party, I am blessed to have this lifestyle. Melodies, beats, lyrics and glorious sounds are everywhere. Perhaps I write industrial music because it is all around me. Music is everywhere. I am overwhelmed with the wonderful cacophony of our society.

Last word: Keep making your art and music! More than ever, our society needs freedom of speech and creative expression. Someone, somewhere will love what you do – so keep doing it!