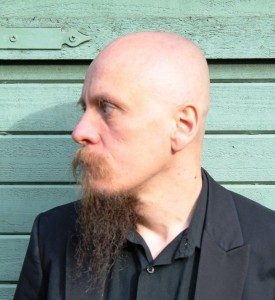 Fredrik Djurfeldt is a musician of multiple talents. The EBM community know him as the front man of Severe Illusion while he’s also involved in Instans. The Swedish artist also has a darker and obscure side, which he fully exposed into bands like Knös and Analfabetism. I get in touch with Fredrik to get more details about his dark-ambient and noise-minded work. He recently released a poignant album entitled “Av Hjord Är Du Kommen” on Tumor/Malignant Records.

Q: Your involvement in electronic & EBM driven bands like Instans and Severe Illusion at one side and more dark-ambient & industrial inspired bands like Knös and Analfabetism at the other side reveal a great eclecticism. Where does this diversity comes from and what are the main differences moving from one style to another?

Fredrik: I have been into electronic music since I was very young. Me and a friend started experimenting with old tape recorders and anything else we could get hold of when we were about six years old. Later I got into machine language programming on 8-bit computers, and started tweaking the SID chip like to may others back then. So partly I come from an SPK type mind set, partly from a heavily Rob Hubbard influenced culture.

I have been trying to combine the two from time to time, something I believe is evident in some of the more experiential parts of Severe Illusion. The DSBP years are a good example of that.

I have been making some Ambient Noise from time to time for well over twenty years as well, but it was first when Peter Nyström from Megaptera and Negru Voda suggested we release a split together a few years ago that I decided to go all in with that as well.

Then again, the distinction between the projects is not always obvious. Not even to me. The new Instans album “Derailed” is fairly close to some of our early works from Severe Illusion. There are two Ambient Noise tracks on the last Severe Illusion album. I would expect this to happen even more in the future.

Q: What are your main ambient/industrial references and criteria about the composition when focalizing on Analfabetism?

Fredrik: I like working with a more complex rhythm structure and atonality than is really possible in EBM and Dark Electro. Sometimes. I have made extensive use of modular synths on the one hand, and home-made metal percussion on the other. I am not listening so much to what contemporary musicians within the genre do, even though it happens.

Q: Can you explain the so-called ‘correlation between western drug culture and mental illness, and applied quantum physics’, which you seem to fuse and transpose  into one musical concept?

Fredrik: Mental illness is in itself a misconception. It is a failure to see the individual as part of a profoundly sick society. So when the individual is starting to malfunction, it is commonly drugged back into compliance. It should be done the other way around. I have been working within psychiatry for quite a few years, and so I have been studying this from a very close distance. Endless conversations will the so called insane have served as a foundation for how I structure the music of Analfabetism.

Q: What have been your main ideas when starting the writing of “Av Hjord Är Du Kommen” and how do you look back at the result right now?

Fredrik: It actually goes back to Severe Illusion and the year 2006. We went to play at the ‘Deti Nochi’ festival in Kiev, Ukraine. We spent a few days in the city, and had a truly amazing time there. I personally liked Ukraine so much I came back a couple of times just to travel around the country. This took me to the beautiful city of Donetsk just before the Western backed Nazi coup in Kiev. Now the war is raging on and people I’ve met are throwing bombs and stuff at each other.

The title of the album is a play on words. What it is saying is, that people who follow the herd and mentally dead. People going to war just because their leaders told them to do so, are mentally dead. Human society is insanity played out on a macro scale, and with Analfabetism I am trying to express that with sound, with rhythm and without distinguishable words.