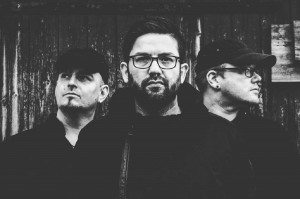 Amnistia is Stefan Schœtz (arrangements, sound, lyrics), Tino Claus (vocals, lyrics, arrangements) and Jan Moritz (arrangements, sound). This German trio is based in Leipzig and is already active since 2003. They’ve released an impressive number of productions on their own label 9X0 and on Scanner (Dark Dimensions), but their newest work “Dawn” is according to me their most accomplished and successful album, which will appeal for all lovers of EBM. It also was a good reason to get in touch with the band for this ‘click interview’.

Q: Can you briefly remind us how you guys met and decided to make music together?

AMN: Tino and Stefan met first at a party of a mutual friend in Spring or Summer 2001. After that they had endless talks about music and all the things which were and still are right and wrong with it… In 2003 they started to explore sequencers and synthesizers and wrote first songs and after first concerts in 2005 they released their first demos on a CD-R in October 2005.

In 2006 they were in touch with Jan, who had experiences mixing bands live, and decided to engage him as sound engineer. Tino, Stefan and Jan knew each other because all three were in the ‘black scene’ for many years. Since summer 2006 when Stefan was prevented to play a live-show Jan joined Tino on stage and following that became a live member. In 2010 he officially joined forces with Tino and Stefan and became a band member because of his growing contributions in the songwriting and production process.

Q: You’ve just released your newest album “Dawn”. What has been the inspiration behind this work and what are the differences with previous albums?

AMN: It is an unwritten law in the studio of Amnistia that nothing is calculated and that we record whatever we have in mind or just what comes out when we use our machines. During the production of “Dawn” at first we spent a lot of time playing around with our newest synths. This led us to the way we have taken. The result is a grown sound that is a bit different to the previous albums but still the sound of Amnistia, just with more sound-tweaking and more analogue-power.

All in all we liked this ‘back to the roots-approach’ and it defined how the whole album sounds. The idea to connect the single songs with small instrumentals, the so called “Mirrors” to one thing wasn’t new but we realized it with this album for the first time. We always liked it when our heroes made this in the 90s.

Well, inspiration is always basically everything what happens around us and there was much in the last years. Tinos lyrics are facing more the bad things in the world than the good ones. Another difference is that we made this album completely alone. There was no help from third parties. Mixing, mastering, even the cover-artwork and sleeve-design was made by us.

Q: I experienced “Dawn” as the most accomplished album to date; it feels like most elements of the production have been seriously improved and refined. What’s your own perception and tell us a bit more about the writing and recording of the album?

AMN: We think you are right. We just want to become better day by day. Stefan is kind of a perfectionist (sound-wise) which drives the other two guys crazy. There is a learning curve of course and while we all constantly listening to and making music and playing concerts we just raise skills slowly but constantly. The songs were mainly written in the studio. Tino and Stefan sketch ideas at home sometimes, but mainly the tracks rise in the studio where we meet at least one evening a week.

Q: The double CD features an extra disc with an impressive list of remixes. Tell us a bit more about the selection of the remixers and what did they add to the original work?

We believe all remixers did an incredibly good job. There are outstanding versions that work totally different than the originals. It’s always nice to hear what other artists build out of your ideas!

Q: I noticed that there also is a strictly limited edition of “Dawn”, which is only available via the band and featuring an extra USB-stick with lots of extra songs. Tell us a bit more about it?

AMN: We started making ‘deluxe-boxsets’ with our 4th album “Anti#Versus” and liked it to put effort in a box that truly comes from heart for our fans. This time we decided to include an USB-card which carries lots of previously unreleased demo-and live-tracks. It is meant as a gift to our loyal fans who partly follow us since the very beginning. Another item was a nice little army-bag with an embroidered Amnistia-logo. The boxset was sold out within two days after announcement.

Q: All official releases have been released on Scanner/Dark Dimensions Group, but you’ve also released a bunch of CDR-productions on 9XO Media. Tell us a bit more about all these productions?
AMN: 9X0 Media is in fact our own small label. We all are music maniacs and like collecting CDs, vinyls and tapes. While most of demo-releases come out without a catalogue number we wanted to do it in a way a label would do it when we started to release back in the days. Following that the first ‘releases’ on 9XO were our own demos on CD-R that we have sold at our first concerts. The first (strictly limited) CD-R was sold out completely during the first show, so we needed a second one. When it was sold out we made the 3rd and so on until our first album was out on Scanner/Dark Dimensions.

9XO Media  is still active for special releases like promotional CD-Rs or special editions for friends.