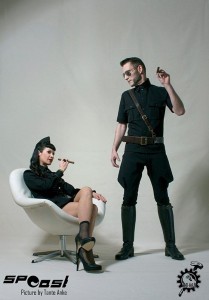 AD:KeY is driven by Rene and Andrea Nowotny. The 4th album “Anthropozän” released on Emmo.biz at the end of 2015 is without a shadow of a doubt their most accomplished and successful work to date. This is pure EBM on which old-school elements have been reworked into a sophisticated production. Their sound is no longer comparable with the stereo-typical standards in the genre, but belongs to the most intelligent format of EBM.

Q: You’ve recently released your 4th album “Anthropozän”, which I think is your best and most accomplished album so far. What does this new album mean to you and what do you keep in mind from the composition?

Rene: The album “Anthropozän” was very important for us. It took our almost 3 years to produce it and we are very happy with the result. It has become a very personal and complex album that combines our thoughts. The opening song “Anthropozän” is about people dealing with nature. We shape our planet earth into something new, we change it and we dig it. We build gigantic cities in which millions of people live in cramped. We believe that we can improve this site. In reality, we destroy our own livelihood; polluted oceans, destruction of natural resources, climate change. We are builders and destroyers simultaneously.

Andrea: The song “Kontrovers” describes the contradictory nature of man; people and their opinions polarize. But we are moving in the shades between black and white, hot and cold. We are neither heart nor head. We are both.

Q: It all looks like you guys got some fun making the clip “Autodynamik”. What did you try to express in it and how what do you think about the global result?

Andrea: The clip “Autodynamik” is fun, but it also is a part of our freedom to do what we like. So we jump in puddles when we want. No one can stop us. We enjoy the moment of freedom. The ‘jumping in puddles’ is an expression of childlike light-heartedness. It is an expression of joy and freedom. The text says: “I decide about me, I decide what I want.” We want to be free. Yes: We think that we express with the clip vitality, away from the typical video clip aesthetics in EBM- genre. If we as adults want to jump like children in puddles or daub with cakes, then we simply do that. We do not care what others think about us. We don’t harm other people with it.

Q: You recently made a remix for Front 242 (cf. “Take One”). How was it for you to remix the ‘Godfathers’ of EBM and especially one of their early hits? What did you try to add to this remix?

Rene: It was a great feeling to remix the heroes of our youth. Of course it was not easy remixing “Take One”. The original version is perfect and no one can’t make it better. But you can change it and reinterpret it. We have endeavored to make it sound like AD:keY. We have omitted most of the sounds from the original version and have programmed the synthesizer the way we like it. Actually we only used the original vocals and trumpet sounds from the original. For the drums, we have incorporated the voice of Andrea as a snare effect, which can be heard well at the beginning of the cover version. This gives the song the typical AD:keY feeling. In addition, we thought that many other remixers would try to make it sound ‘hard’ for the clubs. We did not want that. “Take One” should get a kind of pop song structure. For this reason, we have also added the string sounds and a melody. We are very satisfied with the result.

Q: You’re into EBM for years now so what do you think about the global evolution of ‘electronic body music’ and what’s your impression of the scene today?

Rene: That is a difficult question. There are many great bands: Spetsnaz, MRDTC and many others. The old heroes, Nitzer Ebb, Front 242 or Leaether Strip are still active. The scene has become more diverse. However, we also notice that the scene is older. EBM is a subculture. This is good, but on the other hand it’s also bad because the scene is missing ’fresh blood’. If we go to concerts or clubs, we always meet a lot of familiar faces. The scene (at least in Berlin) is small and manageable. Everyone knows everyone.

It has an impact on the music: sometimes I have the impression that a few new bands don’t have the courage to do something really new. There are constantly repeating old patterns. These bands sound like they were living in the year 1989! On the other hand, if it would sound different, it would no longer be EBM!

The scene has problems to accept new things. DJ’s always play the same (old) songs. Sometimes we make a bet, which song will he play now.

Andrea: Nevertheless, we feel comfortable in the scene and take pleasure in the music. We go to concerts and enjoy our lives.