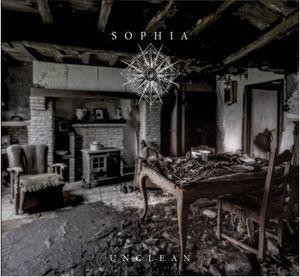 Background/Info: Set up by Peter Bjärgö –as a side-project of Arcana, Sophia was mainly active and prolific around the millennium years. The last album (cf. “Deconstruction Of The World”) was released in 2003. The band finally went through a long hibernation and finally resurrected a few years ago. “Unclean” –featuring original members of the band, is the first opus resulting from a new Sophia era.

Content: “Unclean” invites the listener to embark for a heavy industrial-minded voyage. The work is characterized by an overwhelming production revealing solid and poignant percussion parts. Heavy drones and epic-industrial fragments inject a stunning boost to this work. But “Unclean” moves further than only industrial components. The work is spiced up and accomplished by intriguing and dark sound atmospheres.

There’s a spooky element hanging over the album, which is reinforced by judicious and haunting, whispering-like vocals. You get the impression that there’s an evil spirit active. It creates a malefic symbiosis with the bombast of the percussion. It sometimes reminds me a bit of Laibach, but in a darker and definitely more ambient format.

+ + + : The global production –and especially the percussion parts, is fabulous. Sophia has constructed a fascinating sonic bridge between early industrial elements and a very personal and contemporary creation. “Unclean” also reveals a genius vocals production, which sounds complementary with the music.

– – – : My only regret consists of the multiple short-during tracks.

Conclusion: The years of absence seem to have been only very inspiring to get Sophia back on the map of industrial music. “Unclean” is a successful ‘rebirth’ and I dare say one of their most accomplished work to date.