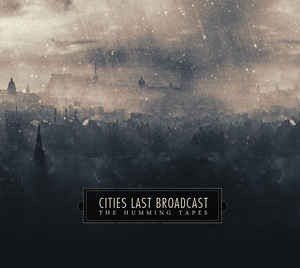 Background/Info: Pär Boström who’s mainly active with his Kammarheit project now gets back to his Cities Last broadcast side-project. A debut album “The Cancelled Earth” was released in 2009 on Cyclic Law. Boström now joined this other familiar ambient label Cryo Chamber.

Content: “The Humming Tapes” resulted from the mix of multiple field recordings and dark-ambient music. You quickly get the impression walking throughout a ghost town. This scary trip all takes place in your imagination and is stimulated by the dark sonic universe of Cities Last Broadcast.

The dark sounds and noise treatments rapidly get you in their grip while a few monstrous sound manipulations will scare you. “Glossalalia” reaches the ultimate point of horror, which also reveals a great sound production.

The visual strength emerging from this work is a fascinating experience although the last cuts are more intimate yet still very tortured. Pär Boström experiments with delicate noise treatments injecting a rather unexpected subtle element to his work. It doesn’t take a way that it feels like you are visiting the bowels of the earth featuring some unspoken truth, with some real frightening moments. The boiling sound manipulations accentuate this vision of horror.

+ + + : This work is made of an interesting twist between pure experimental field recordings on one side and an intriguing dark-ambient composition on the other. I discovered impressive sound manipulations and heavy noises. The main strength of the work however appears to be its visual appeal created by tormented sonic atmospheres.

– – – : The debut part sounds more hesitant so it takes a few cuts before you really can experience the dark impact of this work.

Conclusion: The ultimate strength of dark-ambient music is when the listener starts to get confused; this is the point where he no longer can tell the difference between reality and fantasy! “The Humming Tapes” has this magic power giving you the impression to walk throughout an unknown and dangerous black whole belonging to a dark-sonic space.

Since you’re here … … we have a small favour to ask. More people are reading Side-Line Magazine than ever but advertising revenues across the media are falling fast. And unlike many news organisations, we haven’t put up a paywall – we want to keep our journalism as open as we can. So you can see why we need to ask for your help. Side-Line’s independent journalism takes a lot of time, money and hard work to produce. But we do it because we want to push the artists we like and who are equally fighting to survive. If everyone who reads our reporting, who likes it, helps fund it, our future would be much more secure. For as little as 5 US$, you can support Side-Line Magazine – and it only takes a minute. Thank you. The donations are safely powered by Paypal.
Tags: Cities Last Broadcast, Kammarheit