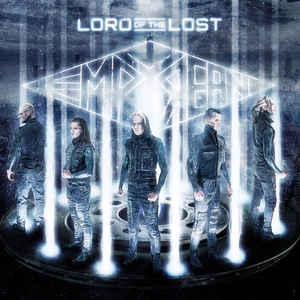 Background/Info: Chris Harms set up Lord Of The Lost in 2008. The first official release was the EP “Dry The Rain” in 2009. It was the start of a real prolific career, the band releasing minimum of one new album every single year. They last year realized a symphonic opus (cf. “Swan Symphonies”), but are now back with a new and heavy exposure of their metal-rock inspired sound. For Empyrean they’ve asked Formalin (label- and town mates) to help them producing the album.

Content: Lord Of The Lost is one of those German bands, which seem to be rather successful in their homeland, but rather unknown outside the borders. They don’t play this typical German goth-rock music driven by German vocals, which makes it hard to understand why they didn’t become more famous.

One thing is for sure, if you like furious guitar riffs mixed with electronics and driven by a devilish cadence “Empyrean” is an album that will interest you. Different music genres like rock, gothic and metal have been mixed together while explicit electronic arrangements and some aggressive sequences can be noticed as well. There’s a real cool harmony between all of the influences, which is even refined by some cello and piano play. On the other side, the album also reveals a few epic arrangements injecting certain drama tot the work.

“Empyrean” is a ‘hard’ album, but totally accessible. Chris Harms took care to accentuate his songs with melodic lines and carrying choruses. This way he injects a poppy touch to the tough work. And the work remains mainly hard and dominated by the heavy and sometimes nearly screaming, but charismatic vocals of their front man. There’re a few female backing vocals running through the work, but that’s rather an exception.

The bonus disc entitled “The Final Chapter Of Mankind”. There are 8 songs on this disc starting off with a great orchestral cut, which would be perfect as soundtrack. This song “Utopya” appears to be a nice ode to the legendary book of Robert Moore (cf. “Utopia”) which was written exactly 500 years ago now. The other cuts left are characterized by an increasing power and I dare to speak about a sonic violence accentuating the metal inspiration. But it all remains well-balanced with refined and subtle arrangements.

+ + + : Lord Of The Lost holds on this marvelous sound formula mixing heavy guitar and insane drum cadences together with carrying electro parts and delicate arrangements. This band is not just experimenting with metal music, but has created a higher sound dimension featuring multiple influences. “Empyrean” sounds more into metal music and at the same time more electro-like as well. The regular album reveals a few outstanding cuts while the opening song of the bonus-disc sounds absolutely phenomenal.

– – – : There’s nothing really negative to say about this album, but the main point with Lord Of The Lost maybe is that they’re still somewhere in between different genres without becoming totally ‘metal’-like. It now remains a kind of rock-goth-metal-electro sound, which is quite accessible for a wider audience, but maybe not enough specific to reach the top of one established style.

Conclusion: Lord Of The Lost brings different although related music genres together in one of their best productions ever: “Empyrean”.

Tags: Lord Of The Lost