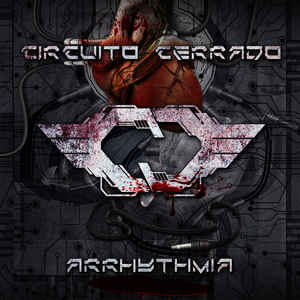 Background/Info: Markko B(arrientos) is a renowned artist as leader of the Mexican dark-electro project C-Lekktor. Two years ago now he took his fans by surprise launching a new project dealing with a hard electro-industrial sound. The album “Distortment” got released on Infacted Recordings. Later on Markko B set up another project called Kromak, which is more into techno-trance. He’s now already back on track unleashing the second full length of Circuito Cerrado, which has been released on Alfa Matrix.

Content: Circuito Cerrado is not the typical type of electro-industrial music. You can easily notice Markko is still inspired by hard techno formats and dark-electronics. “Arrhythmia” is driven by hard and impressive industrial treatments, which you’ll easily notice when discovering the distorted drum sections and the tortured electro sounds. The work has been accomplished by an impressive arsenal of noises and manipulations.

Next to the industrial content the work also reveals technoid elements, spoken samplings (which sometimes might remind you of Noisuf-X), dark-electronic leads and even a few acid treatments. Some passages on the debut album were clearly inspired by the industrial-rave sound of Noisuf-X. This input is less present now although it clearly remains a sonic reference in the work of Circuito Cerrado. Notice by the way that Jan L did the mastering of this album.

+ + + : Circuito Cerrado deals with an elaborate industrial composition, which is more sophisticated than the average power-noise formation. This industrial sound is more accessible through the input of different extra elements while the technoid elements get it more danceable. The song “Training Day” featuring “Full Metal Jacket”-samplings is not the most original song yet a real potential hit. Noisuf-X fans will be pleased by “Stress Generator”, which is a damned pumping song in the industrial-rave style.

Among the remixes I highly recommend Chainreactor and Antythesys. Both remixing a song that was originally released on the debut album of the band.

– – – : I personally have a little preference for the previous album, which was closer to Noisuf-X. It just proves that an album doesn’t always have to be original in sound to be successful. Don’t get me wrong, this new opus is a remarkable composition, but maybe with not as many potential hits.

Conclusion: Circuito Cerrado probably is one of the hardest and most industrial bands signed at Alfa Matrix. This formation might open a door for more talented industrial-minded formations on the Belgian label. “Arrhythmia” also confirms the extraordinary talent of Markko B who’s definitely becoming one of the hottest artists of his generation.