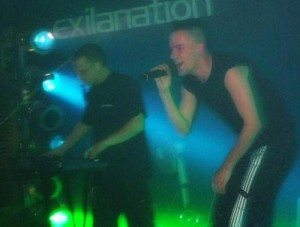 Background/Info: Exilanation is a German EBM formation that was mainly active a few years ago. After a hiatus of 8 years they’re now back on track with a kind of ‘best of’ taken from their previous albums released on Codeline Records. They released 3 full length albums; “EBM Is Not Dead” (2005), “The Matrix Is real Loaded” (2006) and “Sunshine In The Daylight” (2008).

Content: The opening cut clearly reveals the EBM inspiration of the band, but the main point that hurts is the globally under-produced work. Quite progressively the songs start to get better and especially reveal a mature production process. Exilanation clearly doesn’t reinvent EBM and some of the songs even sound a bit like out of time.

One of the main characteristics is the melodic content running through the songs. Most of the leads reveal a wafting EBM sensation, which sometimes remind me of early Decoded Feedback. It injects an evasive element to the work. The melodic part is sometimes joined by bombastic percussion parts and in the end it all sounds efficient.

The last part of the work featuring several cuts from their last album reveal an interesting EBM approach with a brilliant instrumental piece (cf. “Overture 2 Hell”) and a harsher, but still melodic and somewhat Suicide Commando-inspired cut (cf. “Mindslavery”). Both last cuts are remixes by Re/Legion and Asphyxia, which were originally released on the “Confusion Remixes”-album (2008).

+ + + : Especially the ‘late’ compositions from Exilanation make sense featuring an interesting twist between classical EBM structures and cool, melodic leads. The instrumental “Overture 2 Hell” will possibly appeal for fans of Feindflug. This song was maybe a kind of experiment, but definitely an interesting future path to move on with. Both remixes are quite noticeable cuts.

– – – : I don’t really see the bonus of this album except to bring the name of the band back to life. It doesn’t bring anything really new while some of the earliest cuts are suffering from a lack of production.

Conclusion: Let’s stay positive; “Best Of Trilogy” is an opportunity to discover an interesting EBM formation while I hope this ‘anthology’-release will incite Exilanation to release new material.