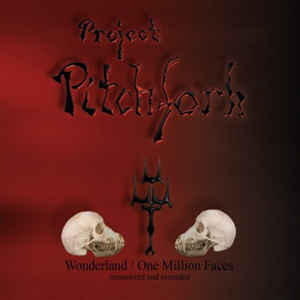 Background/Info: Project Pitchfork doesn’t need any further introduction. The band from Hamburg set up by Peter Spilles is one of the absolute leading formations in the electro-underground world since years. This EP was originally released in 2006 featuring 6 songs and without any single remix (which I think is important to mention for an EP). It was more a kind of mini-album featuring exclusive songs. Only a remix of “One Million Faces” was later released on the album “Dream, Tiresias!” (2009).

This EP is a remastered- and extended version of the original release, but it first of all is a record for the die-hard fans.

Content: The work takes off with the single song that wasn’t originally featured on the original release, but on the “Dream, Tiresias!”-album. It’s a kind of extended mix where you can rediscover all the sound ingredients that makes this German combo famous. It’s a classical Project Pitchfork-song mixing their usual bombastic drum sections with dark electro-wave music and the typical, but unique charismatic vocals of Spilles. The remix is definitely better than the original song.

We next get the remastered songs of the EP featuring harder and somewhat experimental cuts, but also the softer side of the band resulting into a kind of experimental-ballad style. I in a way rediscovered the magic of “Résumé”, which is a beautiful dark wave-pop song, but still “Research” has this little touch of magic. There’s an industrial element running through this cut, which however remains pretty ‘Pitchfork’-like. The “Consequence”-song is another somewhat forgotten treasure from the band’s discography, which is mainly characterized by repetitive, robotic vocal fragments.

+ + + : This EP/mini-album remains a particular item in the band’s discography so in the end it’s a damned good idea to release it again. It’s an opportunity to rediscover an interesting work of the band with an extra great remix on top. This is Project Pitchfork with an extra experimental touch on top revealing great sound treatments. Both title songs are not necessarily the best ones of the release, which makes it even more interesting to discover.

– – – : Except for the remastering, this EP is not exactly revealing new music and that’s why it’s first of all meant to please fans of the band. It could have been interesting to discover at least one alternative version of a song or even a remix.

Conclusion: The “Wonderland “of Project Pitchfork is not exactly one made of happiness and joy so if you want to rediscover this sonic universe covered by dark themes, but composed with great electronic treatments just put your hand on the box-format and you’ll get an extra T-shirt.