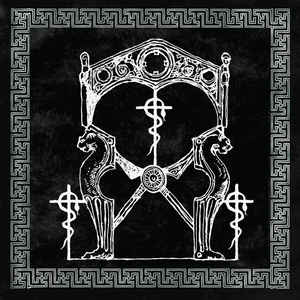 Background/Info: Clay Ruby gained a serious reputation in the private and selected universe of ‘horror-electronics’. This prolific artist can look back on an endless discography which started in 2007. Ten years of powerful and deadly electronics. “Throne” is a selection of rare songs that were originally released on 7” and 12” featuring a few tracks from split-releases.

Content: This album starts off with the title song originally released on a split 7” with Sylvester Anfang. The track stands for a clear and perfect summary of Burial Hex’ work and influences. Heavy screams have been transformed into an extra source of noise, which assimilated with the multiple noise treatments and drones that will bring you into a stupor. From metallic sounds to noise scratches to obscure atmospheres bring the listener into an imaginary, nihilistic experience, “Throne” has this magical power to transform reality into a nightmare vision.

The tracks are quite elaborate and often reveal different parts. Burial Hex likes to move from a heavy noise-minded outburst towards ‘softer’ and more ambient like passages to finally jump back upon merciless noise waves.

+ + + : Bringing different tracks from different releases together might be risky, but “Throne” sounds like a homogenous and compact production. The tracks perfectly match together and constantly move in between death-industrial parts –appealing for some Brighter Death Now fans, to dark-ambient parts. I enjoy the nihilistic vision running through this opus while “Actaeon” is my personal favorite cut I especially like for its industrial noises and percussion parts.

– – – : The title track is maybe the only cut that couldn’t totally convince me. It rather sounds like a poorly inspired teaser for the real consistent part coming up. You better avoid this kind of work if you’re not a bit familiar with Burial Hex and death-industrial generally speaking.

Conclusion: If music is generally conceived to please and entertain people, Burial Hex sounds like a true nightmare making you simply shocked and afraid. This is a dangerous creation composed by a tormented soul!

Since you’re here … … we have a small favour to ask. More people are reading Side-Line Magazine than ever but advertising revenues across the media are falling fast. And unlike many news organisations, we haven’t put up a paywall – we want to keep our journalism as open as we can. So you can see why we need to ask for your help. Side-Line’s independent journalism takes a lot of time, money and hard work to produce. But we do it because we want to push the artists we like and who are equally fighting to survive. If everyone who reads our reporting, who likes it, helps fund it, our future would be much more secure. For as little as 5 US$, you can support Side-Line Magazine – and it only takes a minute. Thank you. The donations are safely powered by Paypal.
Tags: Burial Hex