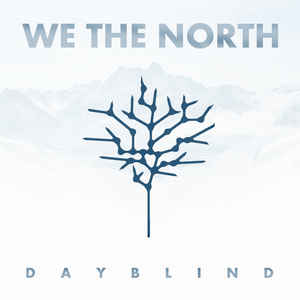 Background/Info: Behind We The North is hiding a solo-project set up and driven by Johan Hansson who you should know from his involvement in Unitary (signed on Infacted) and Cyanide (mainly active during the early millennium years). After the promising debut EP “Endemic” we now welcome the official debut album. Hansson defines his sound as ‘Nordic Noir’, which is an interesting vision.

Content: “Dayblind” features 10 songs plus one remix by Mr. Kitty. The EP already give us a good idea about the sources of inspiration, which have been only confirmed on the album. Next to the 4 familiar EP-tracks we can discover a styled electro-pop sound mixed with some EBM elements like menacing bass lines. The space-bleeps and other evasive passages support the album with an ambient touch.

+ + + : “Dayblind” is a kind of catchy space-pop work filling the gap between EBM and classical synth-pop music. I don’t exactly experience the work as ‘noir’ (back/dark), but just mysterious and mainly evasive. The familiar songs from the EP remain the main attention grabbers and especially “Understand Me” and “Lost Inside” both are great and carrying body-pop pieces. One of the ‘new’ cuts entitled “Ælone” is another attention grabber carried by a Solid bass line.

– – – : “Dayblind” is a successful work, but it’s just a pity we already discovered nearly the half of the tracks on the previously released EP. These songs also remain the best cuts from “Dayblind” so in the end the opus doesn’t deliver many surprises.

Conclusion: We The North invites you to embark for a wistful travel throughout enjoyable body-pop fields and catchy space-electronics. This band is a promising addition to the Space Race Records roster.

Since you’re here … … we have a small favour to ask. More people are reading Side-Line Magazine than ever but advertising revenues across the media are falling fast. And unlike many news organisations, we haven’t put up a paywall – we want to keep our journalism as open as we can. So you can see why we need to ask for your help. Side-Line’s independent journalism takes a lot of time, money and hard work to produce. But we do it because we want to push the artists we like and who are equally fighting to survive. If everyone who reads our reporting, who likes it, helps fund it, our future would be much more secure. For as little as 5 US$, you can support Side-Line Magazine – and it only takes a minute. Thank you. The donations are safely powered by Paypal.
Tags: Cyanide, EBM, Unitary, We The North