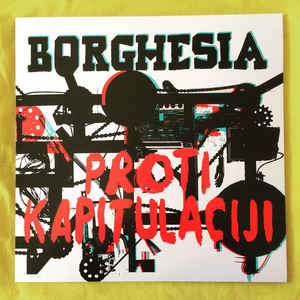 Background/Info: Set up in 1982, Slovenian formation Borghesia became one of the EBM pioneers. The band became a real phenomenon during the 80s and disappeared a bit from the electronic radar in the 90s. After nearly 10 years of silence the album “And Man Created God” saw Borghesia getting back to business in 2014. And here they’re again; Dario Seraval, Aldo Ivančić and their acolytes are back with a new opus, which can be translated as “Against Capitulation”. The work is inspired by the work of Slovene poet Srečko Kosovel.

Content: Borghesia is no longer dealing with EBM. The band has radically changed their style during the years although the music remains driven by some good-old industrial input. Sometimes experimental and even into pop influences, the songs are diversified. From darker cuts to the very soft and lullaby-like “Evropa Umira” there’s a lot to experience. You also will hear classical music samplings, field recordings and the song “Moj Črni Tintnik” featuring sequences from the early electro hit from Trio “Da Da Da”.

The vocals are sung in the band’s Mother tongue. Dario Seraval remains the lead singer, but has been joined by several female guest singers. There are  several duos featured at this opus.

+ + + : One thing is for sure; Borghesia is a stubborn formation, which makes no compromises. They have their own approach, which clearly sounds like a mix between different influences. In the end it’s hard to say what kind of style they belong to, but it’s definitely crossover-like. I prefer the songs with more electronic treatments, “Kons” being probably the best exposure from this work. The male- and female vocals/duos are quite successful.

– – – : Some of the experimental-rock cuts are  definitely not my cup of tea. Borghesia has nothing really in common with their early years and that’s for sure a pity for all EBM lovers. This album makes sense, but the magic is gone.

Conclusion: Borghesia remains a great name because of their successful past, but an album like “Proti Kapitulaciji” definitely belongs to another time and feels a bit like coming from another band.