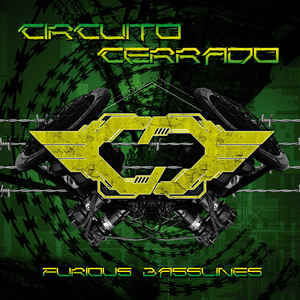 Background/Info: Marrko B. (mainly known from C-Lekktor) and ‘Psyklon’ are back on track unleashing the third full length album from their common project Circuito Cerrado.

Content: “Furious Basslines” is characterized by a harsh industrial sound mixed with technoid/rave-like influences. The songs feature tons of spoken samplings while one song features real vocals by Rexx Arkana (on the bonus disc). The songs are rough and ultra-danceable. It’s not the first time I got the impression Marrko B. has been seriously infected by the work of Noisuf-X although “Furious Basslines” sounds more industrial-like. You’ll recognize songs, which were originally featured at the EP “Revolution”.

The limited edition featuring an extra disc is an opportunity to discover extra songs, collaborations with Rexx Arkana, Noiz+Zilenth and Tanzkrieg plus a remix Circuito Cerado made of an Iszolscope-song.

+ + + : Marrko B.  is one of those Mexican talents who never stop to take me by surprise. This work isn’t maybe the most original one in sound, but the tracks are powerful and simply efficient. The sound treatments are raw and the songs are accomplished. There are a few cool samplings running through the tracklist. This album is food for the DJ’s and dynamite for the dancefloors!

– – – : I was less convinced by the bonus disc; the sound formula becomes a little bit repetitive while the true pearls of the album have been featured at the main disc.

Conclusion: I should ask the same question as for the last C-Lekktor album; where will Marrko B. stop? This work is a great accomplishment.