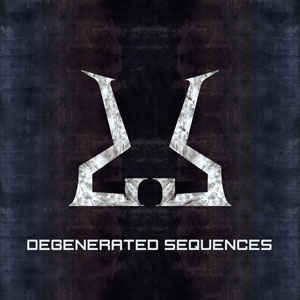 Background/Info: Behind this new formation is hiding PreEmptive Strike.01 keyboardist Yiannis Dseq. The band got introduced to Advoxya Records by his Greek compatriot of Nano Infact and immediately got signed. The self-entitled debut work was already released a few months ago now and features 11 songs that were composed over different periods and years.

Content: Degenerated Sequences totally fits to the dark-electronic taste of Advoxya Records. The influences are clearly into the typical dark electro spirit, but I will avoid making comparisons with other bands. The sound and arrangements are familiar in style, but different in production. The songs have been meticulously built up with multiple effects resulting in a sophisticated production featuring subtle sound treatments. You sometimes get a mix between vintage synth sounds and refreshing bleeps. I also noticed some (sampled) guitar riffs injecting some extra power.

+ + + : “Degenerated Sequences” is not a stereotypical album dealing with dark-electronics. I like the global approach, which is based on sound intelligence and sophisticated writing. You can feel that this album was composed with passion and patience and that’s a rather appreciable way of working compared to most of the bands in the genre confounding quantity and quality.

– – – : Despite of this accomplished production I’m not sure it’s the most accessible production in the genre. The album is maybe missing a real hit to stir up curiosity and fascination for this band.

Best songs: “Transcendental Synthesis”, “The King Of Fool (Fuck You)”, “Existence In Violence”.

Since you’re here … … we have a small favour to ask. More people are reading Side-Line Magazine than ever but advertising revenues across the media are falling fast. And unlike many news organisations, we haven’t put up a paywall – we want to keep our journalism as open as we can. So you can see why we need to ask for your help. Side-Line’s independent journalism takes a lot of time, money and hard work to produce. But we do it because we want to push the artists we like and who are equally fighting to survive. If everyone who reads our reporting, who likes it, helps fund it, our future would be much more secure. For as little as 5 US$, you can support Side-Line Magazine – and it only takes a minute. Thank you. The donations are safely powered by Paypal.
Tags: Degenerated Sequences