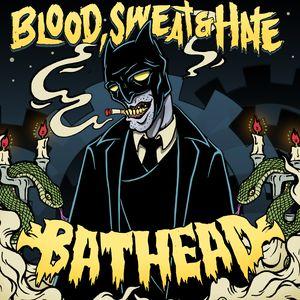 Content: Bathead is a new German EBM project driven by Vadim H. He defines his music as ‘old-school EBM with horror & comic attitudes’. It’s a funny description, which is totally right when you analyze the sound and have a look at the batman-figure comic on the front cover.

The band reminds me a bit of White Trash Wankers (original EBM band by the way) for the EBM inspiration and the comics so I wasn’t surprised to see that they mentioned this band among their favorite bands.

I’ll be short and clear about this debut work. I like the old-school EBM, which often remind me of Swedish bands in the genre, but the production is simply pure amateurism. It reminds me a bit to the good-old demo cassettes during the 90s, which were recorded in a badly equipped studio with low budget recording techniques. I think it’s a real pity this work didn’t get a more professional recording and global sound production because this work reveals excellent musical ideas. I’m sure that re-recording the songs in a more professional studio would result in a pretty cool opus!

Conclusion: Bathead is not reinventing EBM, but has to search for a descent production and recording, which is a main key to success! Let’s keep an eye on this band.