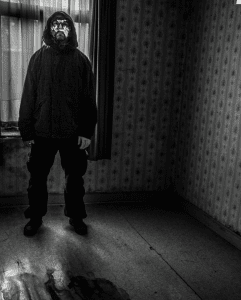 Tcheleskov Ivanovitch is already into music since the late 80s. He together with his brother set up the Belgian project Ivanovitch Dans L’Ombre, but gained more recognition during the past few years with his Grandchaos project. Several productions have been released on labels like Urgence Disk Records and EK Product and are pure lust for lovers of good-old vintage and minimal electronics. More recently Tcheleskov Ivanovitch together with Jacky Meurisse (Signal Aout 42) set up a common project Grand((Ø))Signal, which is another minimal electronic experience.

Q: From the early days of Ivanovitch Dans L’Ombre towards Grandchaos and now Grand((Ø))Signal clearly appears to be a serious move in sound, writing and production as well. What explains this evolution?

Tcheslov: When my brother Trevosky and I founded Ivanovitch Dans L.ombre in 1982, we were at the beginning of the ‘democratization’” of electronic instruments and recording techniques. The production costs were steep, but making music was an enthralling experience mainly because we both entered uncharted territory. It was a labor of love and a way to take part in politics for most punk acts. For Grandchaos et Grand((Ø))Signal (my collaboration with Jacky Meurisse), I took advantage of the creative possibilities offered by modern technology, but it remains quite difficult to attain a tight rhythm section and ‘solid groove’. Machines are just instruments and you need to find inspiration to write music and create magic moments.

Q: Getting back to the early years of your music career, what have been your main sources of inspiration and references in electronic music?

Tcheleskov: As a child, I was very fond of Kraftwerk and J.M Jarre, but they were not revolutionary artists by any means. Fortunately, the punk and DIY ethic made good use of synthesizers to create spontaneous and aggressive melodies. In my humble opinion, Suicide and Cabaret Voltaire were the marquee acts of that period. “Frankie Teardrop” and “Nag Nag Nag” are absolute masterpieces that will remain engraved in my mind forever!

Q: Grandchaos clearly reveals a minimal- and somewhat vintage EBM approach, but still a passion for hardware equipment! What does it says about you as a musician/producer and your perception of contemporary electronic music?

Tcheleskov: I’m irremediably old school! I don’t find digital synths appealing at all. Touching an instrument is essential to me. When I see my synths and drum machines I feel like a kid in a candy store. Music nourishes me. I am always looking out for new bands. Creative musicians continue to explore new sounds and they never cease to amaze me. Record labels continue to play an instrumental role in scouting new talent.

Q: Except the fact that Grand((Ø))Signal is a duo and Grandchaos a solo-project, what are the main differences between both formations and especially when it comes to aspects like sources of inspiration and global production?

Tcheleskov: Grandchaos is a therapy to overcome my personal problems as it allows me to express how I feel. Dark themes such as suffering and death have haunted me for many years. The loss of loved ones as well as my serious health issues may have accentuated the dark tones of Grandchaos lyrics. With Grandchaos, I feel somewhat close to the ‘EBM United’ movement that gained popularity across the globe. The ‘No Pain No Gain’ slogan resonates well with the human nature. Grand((Ø))Signal, for its part, is a joint project between Jacky and me. We put in practice what we have learned throughout our long musical journey. The sound and image have been purified and geared towards the dancefloor. We would like to make retro-futurist music ‘made in Belgium’ that would appeal to fans of Gesaffelstein or Schwefelgelb. The release of our debut album “Aktivation” on Unknown Pleasures Records will definitely prompt us to pursue this project and play live shows.

Q: Tell us a bit more about the choice of the artists who contributed to the remixes on “Days + Memories” and are there some inspiring remixes for the further work of Grandchaos?

Tcheleskov: Every time I discover the work of an artist that inspires me, I add his/her name to my address book and I contact them when the opportunity presents itself i.e when I start compiling remixes. For the “Days” and “Memories” EP’s, I ‘ve had the pleasure to work with mega-talented artists such as Nicole & Anne (2XNI), Noamm or Franck Kartel to name just a few.

Q: A new album (cf. “Tempest”) has been just released on EK Product featuring a new list of remixed songs. What do you like about remixes?

Tcheleskov: 2016 was indeed a very prolific year, and 2017 will be even busier! The “Tempest” compilation just came out on the Italian label EK Product. Many friends took part in this project such as Jacky Meurisse (SA42), Vince (ESR), Dada (BAK XIII) or Arthur Plata (Mechaload) to name a few. My last album “We Suffer When The World Changes” was reinterpreted by artists from across the globe and I’m really glad that Amedeo and his label EK Product decided to release this project. Grandchaos has a long story with the remixes. One could even say that Grandchaos took off with the double disc compilation “In Sedens” compiled by the old school electro purist Nader Moumneh who now runs the highly-regarded record label  Electro Aggression Records (EAR) specialized in old school EBM and complex, multi-layered dark-electro. Nader is also the co-founder of the rising synthpop/Italo Disco record label NADANNA with Marc schaffer of Anna Logue Records.

Grandchaos has been remixed over a hundred times and I’m a serious candidate for the Guinness records. On a more serious note, I truly enjoy the reinterpretation of my songs by other artists. It is a formidable sensation and we learn a lot when we listen to the music of other artists with an open mind.

Q: What brings 2017 for Grandchaos and your other projects?

Tcheleskov: For Grandchaos, a mini-album titled “The Day Disappears Only To Reappear” is slated for a June 2017 release. It will be released as an ultra-limited picture disc via 2 exceptional record labels: Urgence Disk Records (CH) and Law Lynch Records (BE).

Trevosky and I would like to release a compilation featuring unreleased material by IDLO but since the original material was recorded on tapes, it is gonna be a long and daunting task. We will see how it plays out.