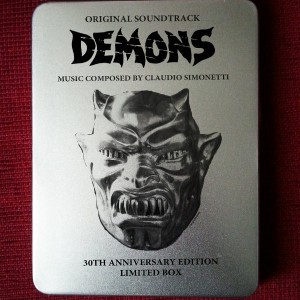 Out by mid-June is the 30th Anniversary Edition and definitive release of the iconic horror film soundtrack “Demons” composed by Claudio Simonetti for Dario Argento and Lamberto Bava’s 1980’s gore classic “Demons” in a 2CD box (you can order your copy now). The release comes in a limited Tin Box (299 Copies) and contains the soundtrack CD plus an exclusive bonus-CD entitled “Soundtrack Remixed” with remixes by Ohgr, Bahntier, Leather Strip, Cervello Elettronico, Needle Sharing and many others + a transparent postcard + a Metropol ticket + a litte bag + silver pin.

Also available is the release on blue vinyl (buy here) and the 1CD version (buy here).