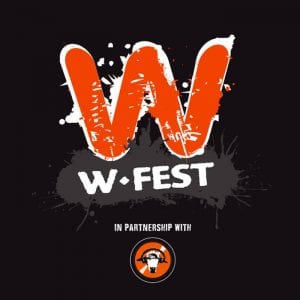 Background/Info: This compilation featuring 26 bands is a way to remember the great W-Fest (festival) that took in place this Summer in Belgium. The festival was spread over 4 days, 3 scenes and featured an impressive number of bands. The organization invited some legendary 80s artists next to contemporary groups.

Content: The first CD is clearly devoted to different kinds of electronic underground music. Parade Ground and A Split second will Takes us back in time with some legendary 80s songs while the electro-pop & minimalism of other bands such as Simi Nah, Enzo Kreft, Vive La Fête reveal contemporary 80s inspired sounds. It also is a way to rediscover some living legends such as Dive and Suicide Commando plus smaller bands such as Mildreda, Pro Patria, Herrnia.

The second disc brings us a mix of ‘old’ and contemporary gothic/new-wave. Red Zebra is a band we all know in Belgium, and which remains one of our best 80s ambassadors. A Slice Of Life could be the next big thing from Belgium. Here again you’ll discover very diversified groups moving from Ground Nero to Flesh & Fell, from Doganoc to The Breath Of Life etc.

+ + + : This is a fully enjoyable compilation, bringing different genres and especially music decades together. It also is a way to realize Belgium has a real great underground scene.

– – – : I just regret there aren’t more ‘exclusive’ tracks featured on the album, but it remains first of all a way to promote a great festival, already announced for 2019!

Conclusion: After the terrible lost of the Eurorock festival, Belgium moves on with a new ‘big fest’: W-Fest.

Since you’re here … … we have a small favour to ask. More people are reading Side-Line Magazine than ever but advertising revenues across the media are falling fast. And unlike many news organisations, we haven’t put up a paywall – we want to keep our journalism as open as we can. So you can see why we need to ask for your help. Side-Line’s independent journalism takes a lot of time, money and hard work to produce. But we do it because we want to push the artists we like and who are equally fighting to survive. If everyone who reads our reporting, who likes it, helps fund it, our future would be much more secure. For as little as 5 US$, you can support Side-Line Magazine – and it only takes a minute. Thank you. The donations are safely powered by Paypal.
Tags: Baustein, Doganov, EBM, Eurorock, Mildreda, V/A, V/A W-Fest, w-fest