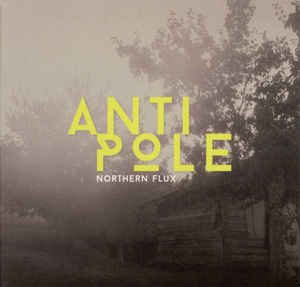 Background/Info: Antipole is a Norwegian duo consisting of Karl Morten Dahl assisted by Anne-Christel Gullikstad. This album also features Paris Alexander and Eirene who are both from Brighton (UK). After 2 self-released EP’s they joined hands together with the French label Unknown Pleasures Records to unleash their debut album.

Content: If you’re familiar with the dark-wave taste of the French label you’ll rapidly have to recognize Antipole has found the right home to produce their music. “Northern Flux” indeed sounds deeply inspired by the darkest hours of the 80s new-wave and cold-wave movement, which might remind you of early The Cure and Siouxsie And The Banshees. The band also seems to be influenced by Joy Division and made a cover of “Insight”.

The sound formula is pretty simplistic and mainly carried by guitar playing and slow rhythms. I noticed some electronic arrangements on a few cuts.

+ + + : The simplicity of the writing creates an interesting minimal- and intimate aspect, which globally speaking I really appreciate. The guitar playing is the major element running through the composition. There also is an interesting duality between the rather inhibited male vocals at one hand and the more sensual female vocals at the other hand. One of the most noticeable cuts is “All Alone”, which sounds more accomplished because of the extra electronic treatments.

– – – : The minimal- and simple sound approach is quite noticeable, but still becoming a little less monotonous after a while. I think this band has found the right sound approach, but is missing some extra arrangements and sound layers to get a more accomplished production.

Conclusion: Antipole gets back to the magic of 80s and cold-wave music to present a minimal-, intimate- and melancholic work. With some extra elaboration this formation could become really interesting.