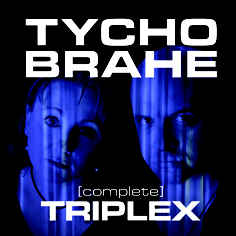 Background/Info: Originally set up in 1993 by Ken Evans and Georgina Emery, Australian formation Tycho Brahe can already look back at a serious discography. This new album brings the 3 “Triplex”-EP’s together on one full length album. These EP’s were (digitally) released in between 2013 and 2015. So you get a total amount of 12 songs plus 3 bonus tracks.

Content: I’m not familiar with the entire discography of Tycho Braha, but all I can remember is that this band has never really disappoint me although I never became totally convinced. This album is different and for sure an opus I’ll not soon forget.

The electronics are clearly 80s inspired and often reminding me to an imaginary crossover between Heaven 17 and The Human League. The songs are masterly accomplished with a perfect balance between electronics and guitar play. The work is bringing great elements together; bombast and refined bleeps, alluring bass lines and catchy choruses, typical 80s arrangements and mysterious atmospheres with charismatic vocals on top.

+ + + : This album resulted from the creative process of talented musicians and it in a way made me rediscover this band. The songs are pretty 80s like and even if they remind me of legendary electro/wave-pop bands the production also reveals a very unique approach. The composition is entirely accomplished and there’ are no real songs to throw away. I know less albums that fascinate the listener from start till finish. This opus is not only powerful and well-crafted, but featuring numerous potential pop-hits. Especially the second part of the work is amazing; tracks like “No Love”, “1985”, “Valerie Perrine (Miss Teschmacher)”, “Savage” and “Another Useless Photograph” all are real highlights. This album is not a stereo-typical production although driven by familiar influences.

– – – : The bonus tracks don’t bring a real bonus, but just a little extra for all of those who already know the original “Triplex”-EP’s. The main point that hurts probably is the fact this band definitely has to conquer our old continent where they aren’t that known and recognized.

Conclusion: I can only, but thank ScentAir Records to have released this opus, which I consider as a ‘major’ contemporary release in electro-pop music. This is an album that will ravish 80s lovers, but especially all electro-pop freaks. This album is a real must have!