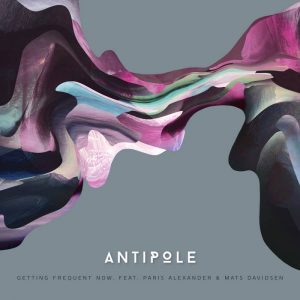 Background/Info: Norwegian artist Karl Morten Dahl is the creative spirit behind Antipole. This is the second self-released album featuring eight songs. Mats Davidsen is singing on the opening cut while Paris Alexander is singing on the other tracks. The band has now joined hands with French label Unknown Pleasures Records to move on with a new and ‘official’ work.

+ + + : Antipole is bringing the 80s back to life with some elegance. I like the guitar playing and New Order as reference. The work is dark and yet evasive. It’s the kind of album you can dream away on although it’s not exactly what I would call ‘happy music’.

– – – : The songs rapidly start to sound pretty similar. I should say great sound, but less diversity and that’s definitely an aspect I hope Antipole will improve on their next work. I’m also missing a bit more passion in some of the vocal lines.

Conclusion: If you’re into the new-wave nostalgia from the 80s, Antipole will clearly catch your attention. I’m however convinced this band can do much better than what has been shown on “Getting Frequent”.