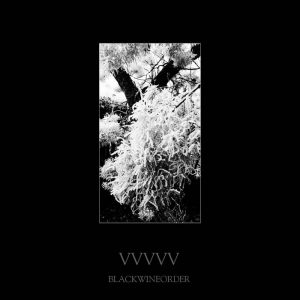 Background/Info: I didn’t get any relevant information from this French formation. “VVVVV” seems to be their first work while a new album has been just released revealing a rather prolific attitude.

Content: The sound of Black Wine Order is inspired by numerous sources of inspiration. I rather would speak about a synthesis between industrial, apocalyptic rock, new-wave and even a touch of psychedelic music. In the end it sounds a bit experimental.

The guitar play takes an important part in the composition, which is joined by low bass lines, minimal electronic tones and a rather bombastic, slow cadence. The vocals are mostly spooky-like and sung in English although you also will notice some French spoken words.

+ + + : Black Wine Order clearly tries to compose a very unique sound, which in the end sounds minimal, experimental and definitely dark. There’s a vague, but cool psychedelic flavor emerging from some cuts and I especially refer to the final song. It even sounds a bit soundtrack-like. I didn’t mention an ambient influence, but the dark atmospheres have something captivating.

– – – : “VVVVV” is not an ‘easy’ work to listen to. The experimental taste of the work makes it less accessible for a wider audience although I’m not sure it’s the real goal of the band.

Conclusion: Black Wine Order invites the listener to embark on a dark sonic journey where different influences are coming together. Let’s keep an eye on this band and see what they’ll do next!