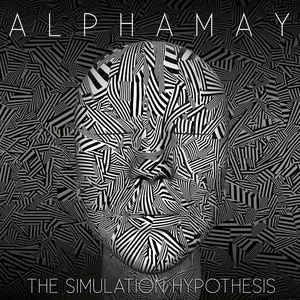 Content: The sound of the new work moves on there where the first full length stopped. Their work is clearly inspired by electro-pop music and sometimes reinforced with EBM bass lines. Sometimes sweet and melancholic and then harder and somewhat into bombastic rhythms, this work is diversified.

+ + + : There’s more diversity running on the new work while Alphamay has also worked hard to find their own sound. They are moving from classical electro-pop standards to tougher cuts with EBM elements, but in the end it will maybe catch the attention of a wider audience. They however prove to have great writing skills, which mainly comes through on the accomplished “Serenity”. If you prefer harder cuts I would recommend “Fractures Of Reality” and “Flat Earth Flat Head”. There in a way is a duality between pop and EBM, which is also noticeable in the vocal parts. I like this mixture.

– – – : Despite of the positive feedback in Germany I’m still convinced there’s much more in this band than what came out of it! The songs are cool and the work is an easily listening experience although I’m missing an absolute hit or dancefloor killer.

Conclusion: Alphamay definitely is a band to keep an eye on. They are driven by intelligent lyrics and enjoyable electro-pop vibes and have made some noticeable progress compared to their debut work.