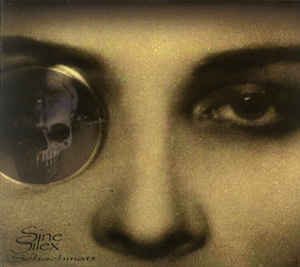 Background/Info: Sine Silex is the meeting between Greek artist Kriistal Ann (also active under her own moniker and member of Resistance Of Independent Music, Paradox Obscur) and Swiss artist Chroma Carbon. This debut album features 10 songs, which have been released on Werkstatt Recordings, which is a quite familiar label to all lovers of vintage electro sounds. Notice by the way that the album is also available on cassette format strictly limited to 12 copies!

Content: Kriistal Ann is an artist devoted to minimal electronics featuring typical vintage synth sounds while she also is a singer with a particular and bewitching timbre of voice. Sine Silex sounds a similar way, but reinforced by the Chroma Carbon. Both protagonists bring an interesting symbiosis between French and English vocal parts.

As already mentioned the electronic format of this work is minimal and clearly evoking good-old 80s electro-wave and pop influences. The sounds are cold and atmosphere pretty evasive-like. Sine Silex deals with this typical ‘sterile’ sound atmosphere from the 80s.

+ + + : I’m not going to say that Kriistal Ann transforms all projects she’s involved with into gold, but the magic of her voice and the old-school minimalism of her music both remain pure magic. And that’s precisely what “Schachmatt” stands for. But next to this vintage approach, there’s a perfect complementarity between both singers. Chroma Carbon sings in a particular and somewhat sterile way, reinforcing the 80s feeling. One of the most noticeable songs from the album is “Modeliste” on, which Kriistal Ann sings in French with a real sexy accent. It also is a specific track as the title and the lyrics clearly sounds like an ode to Kraftwerk’s “The Model”. I fully enjoyed the minimalism of the songs and the harmony between both vocalists.

– – – : My only regret is that the album only features 10, rather short, cuts. It’s in the 80s tradition, but this work appeals for more.