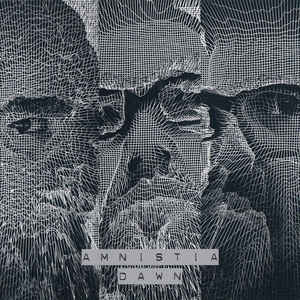 Background/Info: Dawn is the 5th full length album of German trio Amnistia. Stefan Schoetz, Tino Claus (also involved in MRDTC) and Jan Moritz have already been active for a couple of years now and have remained faithful to Scanner/Dazrk Dimensions for their newest opus.

Content: I’ve been never a huge fan of Amnistia, mainly because I experienced most of their work as unaccomplished although featuring interesting EBM elements. “Dawn” sounds like it is moving a step further into a more elaborate and fascinating EBM format.

The influences remain pretty similar, but the global production is more credible and mature. This work reveals great sound treatments, which seems to be an element they especially took care of, featuring multiple raw sound blasts and deep, carrying bass lines. The sound became more powerful and sometimes on the edge of industrial music while dark atmospheres paint the album with a disturbing, but artistic elegance. The hopping sequences and harsh English vocals get it all accomplished.

The bonus disc features 16 remixes by an interesting selection of bands like Formalin, NZR, Les Berrtas, Nine Seconds, Assemblage 23, Severe Illusion, Tri-State, Framework, kFactor, Serpents ao. There’s a real cool diversity in the remixes although most of the bands remain inspired and driven by elements of EBM.

+ + + : Definitely the most successful work of Amnistia, which is created by a great writing process and irresistible sound treatments. Vocals and music together create a hard and harmonious entity. The sound production is raw and unpolished, which creates a vague FLA-touch. Among the remixes I noticed several cool features and especially the more minimal-like contributions of bands like kFactor and The Negativity Bias add a real bonus to the album.

– – – : The album features an intro-like song and 8 short intermezzos, which have been recorded in between the real songs. It might be something special for the band and maybe part of the concept, but I don’t see the real value of all these breaks.

Conclusion: Amnistia has been active for many years now, but this album is for sure their masterpiece revealing a few potential dance floor killers.