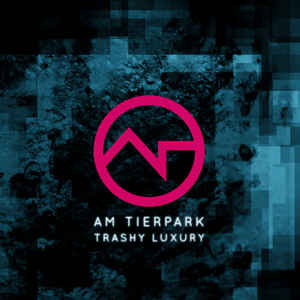 Content: “Trashy Luxury” brings no real surprises rather than an evolution of this 80s inspired and devoted formation. The electronic pop minimalism composed by John R. Mirland and the vocals by Claus Larsen are perfectly matching and once again resulting in several cool cuts. I now and then noticed some arrangements reminding me of Fad Gadget while globally speaking I experienced this new opus as more melodic than its predecessor.

+ + + : What I especially like with Am Tierpark is that it’s not a pure 80s emulation. It simply is a duo inspired by 80s electro-pop, but transposing this influence into a contemporary and especially rather minimal format. I also like some deep, resonating bass lines (especially on “Life On The Run”) and the progression of the melodies. Claus Larsen still surprises me with this sweet timbre of voice, which has nothing in common with the greatest Leather Strip hits.

– – – : There’re a few couple of cuts, which left me totally unmoved (cf. “I Cannot Breathe In Here” and “I Think We Made It”), gave me the impression of being unaccomplished or just there to complete the album. I like the vocals of Claus, but I would be more pleased to get a little bit more diversity in the way of singing.

Conclusion: Am Tierpark maybe started just for fun or as a side-project, but it definitely became a ‘band’ with a very own electro-pop DNA. That’s an aspect I especially like when listening to music generally speaking.