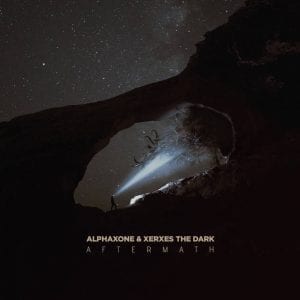 Background/Info: The recently released compilation “Visions Of Darkness In Iranian Contemporary Music” revealed the state of the Iranian dark-ambient music scene. “Aftermath” brings two from the finest Iranian ambassadors in the genre together.

Content: “Aftermath” is a rather typical album released by Cryo Chamber. It’s not only about the ‘concept’ of artists working together, but the sound is also devoted to the taste of label owner Simon Heath. “Aftermath” sounds dark and teasing your imagination to face the darkest subjects hidden in the secret corners of your mind. Nebulous sound waves have been joined by low vibrating sounds while some subtle arrangements are achieving the work.

+ + + : Alphaxone and Xerxes The Dark sound like a compact project bringing. They are real experts in the creation of cold, icy atmospheres leading the listener to face his most secret and hidden thoughts of horror. The work reveals a kind of authenticity, which is due to the use of ‘classical’-like sounds while I also enjoyed the refinement of sound treatments.

– – – : The album is nicely moving on, but is just missing a few moments or passages with a real apotheosis.

Conclusion: “Aftermath” is an invitation to experience a dark and imaginary meditation lead by two talented musicians from the (Iranian)  dark-ambient scene.