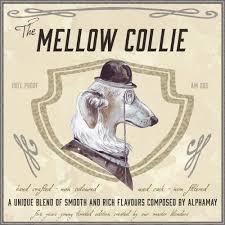 Background/Info: Cris Frickenschmidt and Henning Hammoor released 3 albums under the Alphamay moniker in between 2015 and 2017. All of the albums were released on Timezone while they now strike back with 5 new cuts released in their homeland on Battersea Electric.

Content: Alphamay so far perfectly merged electro-pop and EBM elements together. “The Mellow Collie” is a deeper exploration of electro-pop fields revealing an unpolished production carried by low, resonating bass sounds. Melodic passages reminds me now and then of Wolfsheim. Both of the last songs are a little bit more refined, intimate and more refined.

+ + + : “The Mellow Collie” is not exactly the most typical electro-pop format. The sound is definitely too rough and unpolished, which makes the characteristic of the production. We might say that the German duo has created their own electro-pop format. Both last cuts are more elaborated and sensitive. “Love Must Die” is a cool song while “Wintertime” is a beautiful song accomplished with some orchestral arrangements. Last, but not least I also want to say a word about the great, artistic DVD-package of this EP.

– – – : The unpolished production is one of the main characteristics, maybe making the originality of this band, but I’m personally missing the skills of a real producer here.

Conclusion: Alphamay is a band in constant motion. They have lost the EBM elements to produce a pure, but rough electro-pop music. I’m not entirely convinced, but it might be a basis to move on with.