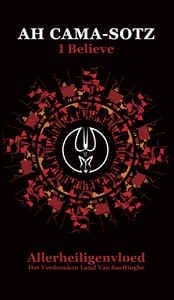 Background/Info: Herman Klapholz strikes back with his ‘Mother-ship’ project Ah Cama-Sotz. “I Believe” has been released as regular album, but also in a very limited edition (500 copies) featuring an extra album entitled “Allerheilgenvloed”.

Content: “I Believe” moves on where some of the most ‘rhythmic’ albums of Ah Cama-Sotz have stopped while it also reflects some techno-influences from Herman’s side-project Gatto Nero. The songs mix industrial atmospheres and sounds together with tribal rhythms and dark-techno. You also will notice some mystic- and Eastern-like influences. There also is a surprising cover version of “Warm Leatherette” among the tracklist.

“Allerheiligenvloed – Her Verdronken Land Van Saeftinghe” is a totally different work and getting back to the ambient- and soundscape approach of the artist. It’s a conceptual work transposed into a dark and mysterious soundscape/cinematographic approach. Herman Klapholz has used classical/sacred chants injecting a poignant touch to the work.

+ + + : It’s really fascinating to see how this veteran from the ‘industrial’ scene also became one of the most innovating artists in his genre. You can hear the eclecticism of Herman Klapholz, which as a creative fluid is running through his music. “I Believe” is a masterpiece, mixing different influences to get an intelligent and efficient danceable opus. It has something shamanic for the rhythms and mysterious for the atmospheres. I sometimes imagine that tracks from this album could have been how Muslimgauze should sound today. The tracks  progressively grow and this crescendo feeling sometimes ends in pure trance! Songs such as “Lords Of Evil”, “I:Travel” and “El Cuerpo, Mild As A Teardrop On A Grave” all are pure sonic xtc!

But next to the trance and tribal work, the bonus disc also is worthy of examination. Ah Cama-Sotz accomplished a meaningful and somewhat ‘sacred’ opus. The choice of the classical chants (especially these from children choirs) bring something magic on top of the dark soundsphere. You get the impression to hear the vibrations resonating in a cathedral.

– – – : Both albums are totally different from each other so it’s difficult to find a real coherence between them both. But I don’t complain as I like both exposures of this artist’s creative mind.

Conclusion: Ah Cama-Sotz took some time to accomplish this new work, but an intelligent and successful work first of all needs the patience of the musician himself. Ah Cama-Sotz never stops taking me by surprise and already accomplished a brilliant opus.

Since you’re here … … we have a small favour to ask. More people are reading Side-Line Magazine than ever but advertising revenues across the media are falling fast. And unlike many news organisations, we haven’t put up a paywall – we want to keep our journalism as open as we can. So you can see why we need to ask for your help. Side-Line’s independent journalism takes a lot of time, money and hard work to produce. But we do it because we want to push the artists we like and who are equally fighting to survive. If everyone who reads our reporting, who likes it, helps fund it, our future would be much more secure. For as little as 5 US$, you can support Side-Line Magazine – and it only takes a minute. Thank you. The donations are safely powered by Paypal.
Tags: Ah Cama-Sotz