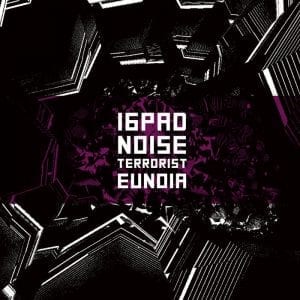 Background/Info: Candy Schlüer (also known from S.K.E.T.) strikes back with 16PNT. “Eunoia” is the project’s fourth full length and the first one since “Zeit” released in 2014.

Content: If you remember previous albums (all released on Hands) you somewhere know what you can expect. The name of the project reflects the content. From heavy d’n’b and breakcore to somewhat calmer passages to technoid influences and even cinematographic parts, this is maybe the most diversified work from 16PNT.

+ + + : This album stands for heavy sounds and the power of breakcore rhythms. But it’s much more than simply power; I also noticed great sound treatments such as a terrific sequence running through “Dark” and the more industrial-techno driven “Taped” remixed by My_Initials. One of the darkest cuts is the remix of “Evilment” by Hypnoskull. Last, but not least I also recommend the very last song of the album (cf. “Arkham”), which is a well-crafted and sophisticated cut supported by a cool atmosphere.

– – – : 16PNT is an atypical formation, which makes the difference with a lot of ‘common’ industrial projects, but on the other side the ‘difference’ also stands for a challenge. This is the kind of project I would prefer to see on stage instead of listening to the CD.

Conclusion: “Eunoia” is a creative piece of music and a true challenge, but it also is a ‘difficult’ work.