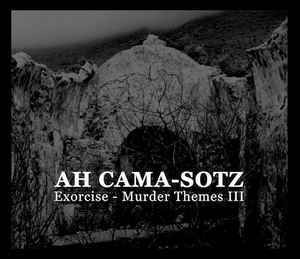 Background/Info: Belgian electro-industrial sound guru Herman Klapholz is back on track unleashing his latest opus, which in a way completes the “Murder Themes”-series he started in 2013. This 3rd volume got a bit more importance being released on CD format and revealing 11 new cuts driven by dark-ambient sounds and themes about religion and fanaticism. All the titles feature an 8-letter word.

Content: Previous Ah Cama-Sotz was driven by transcendental rhythms, dark electro atmospheres and even dub elements, but this album clearly sounds different like showing the other side of the artist devoted to haunting atmospheres.

The tracks aren’t stereotypical dark-ambient cuts, but clearly inspired by the genre. Klapholz takes care to create glacial sound atmospheres mixed with subtle electronic treatments and passages featuring sacred chants. The work was clearly conceived as a soundtrack accentuated by some mysterious and chilling atmospheres. I noticed only one cut featuring a slow cadence.

+ + + : The least I can say is that Ah Cama-Sotz is a project that never really repeats itself. The “Murder Themes”-concept reveals a less familiar –although an old, side of the artist. The tracks were accomplished with some minimal approach in writing while according a real importance to the mystic chants parts injecting a true soul into this work. It’s an overwhelming production with a strong visual appeal.

– – – : Ah Cama-Sotz is used to composing albums with climaxes and that’s maybe what this new opus is missing. It’s a fully entertaining opus, but I don’t find that little orgasmic moment.

Conclusion: “Exorcise – Murder Themes III” is a dark and frightening opus that will appeal to ambient lovers and, which could have been the soundtrack for an obscure movie dealing with religious fanatics.

Since you’re here … … we have a small favour to ask. More people are reading Side-Line Magazine than ever but advertising revenues across the media are falling fast. And unlike many news organisations, we haven’t put up a paywall – we want to keep our journalism as open as we can. So you can see why we need to ask for your help. Side-Line’s independent journalism takes a lot of time, money and hard work to produce. But we do it because we want to push the artists we like and who are equally fighting to survive. If everyone who reads our reporting, who likes it, helps fund it, our future would be much more secure. For as little as 5 US$, you can support Side-Line Magazine – and it only takes a minute. Thank you. The donations are safely powered by Paypal.
Tags: Ah Cama-Sotz