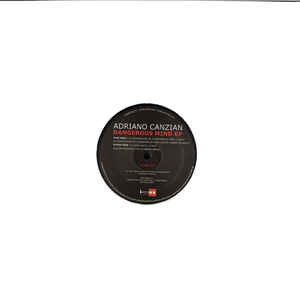 Background/Info: Italian producer Adriano Canzian is a recognized and praised artist active in the wider fields of techno-body music. He got some recognition being signed to the famous International Deejay Gigolo Records, but also released productions on Space Factory Records. His last full length (cf. “Zombies”) got released on I-Traxx Red Edition (2015). The main song of this EP “Confession Of A Dangerous Mind” was originally released on the last album.

Content: “Confession Of A Dangerous Mind” has solid dance cuts and appears to be the offspring between techno music and EBM. It sounds dark and minimal-like. David Carretta (owner of Space Factory Records) remixed the song in a more explicit vintage way.

We next get another song that was originally released on the last album plus a remix from one more song of that album.

+ + + : Adriano Canzian stands for well-crafted minimal electro and techno music. He’s one of those artists who can be easily considered a reference in this music style. It’s really great to see David Carretta having accomplished a remix. There also is a cool and clubby remix of “Sleeplessness” by The Plumbers.

– – – : “Dangerous Mind” doesn’t really bring something new except two interesting remixes –and especially the one by David Carretta. This is an EP for the fans and/of the DJ’s. It’s great dance music, but without an absolute hit!

Conclusion: If you want to dance on techno-body music in clubs, you better prepare yourself to move to the vibes of Adriano Canzian!