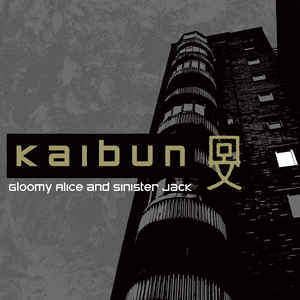 Background/Info: Kaibun is a Belgian project set up by Laurent Delogne (Le Moderniste) aka ‘Jack’ joined by Marie Hubart aka ‘Alice’. Four years after the debut work “Illogism” Kaibun is back on track unleashing a fresh load of industrial minimalism.

Content: Kaibun is less comparable with Le Moderniste. This project is more sophisticated and into modernism. Moving towards the edge of IDM there however is a strong experimental approach although supported with dark and haunting atmospheres. I even noticed a few dreamy passages running through this work.

Kaibun is an open-minded project, which sounds like exorcising several ideas resulting in a diversified and refreshing opus.

+ + + : I like the original approach running through Kaibun. They’ve created a unique sound, which will appeal to lovers of IDM, but especially to industrial freaks in search of new ideas and refreshing compositions. Kaibun rapidly appears to be truly sound architects, which are transforming brutal and unpolished noises into a sophisticated writing. Some evasive parts and subtle bleeps only confirm this approach. I personally prefer the somewhat harder and into ‘rhythm’ tracks, “They Decide To Accept The Invitation”.

– – – : Kaibun is maybe not the most accessible project. It will take you a time and maybe several listenings before you can really get into the sound. The experimental side of the work makes it sometimes less accessible.

Conclusion: Kaibun is back with a visionary industrial composition. This is avant-garde like, maybe opening the gate for the further industrial generations.

Best songs: “They Decide To Accept The Invitation”, “Blood soaked Kiss (Pain Dividing)”, “And The Time Goes By… Death’s Approach”, “We Share The Same Wish”, “Grim Monotony In The Hazy Mind Of Jack”.