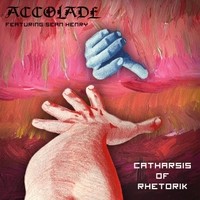 Content: I last year discovered this Seattle based gothic formation by their vinyl “Legends”, which was a rather good surprise.

Their new work is an EP featuring 5 new songs. Singer Stefanie Renée remains an essential element of the band’s sound. She’s a classically trained singer with a captivating voice and clearly a reference to ‘heavenly voices’ and ethereal music. Her angelic timbre of voice directly emerges to embellish the opening song with grace and beauty. A similar feeling can be heard at the beautiful “March”, but she also sings in a more spooky way (cf. “Carthage Fog”) while “Bleeding Cry” is a song where she really excels in the classical style.

Next to the outstanding vocals, the music is also worthy of examination. Accolade has concocted an intriguing gothic minded sound, which is pretty evasive and recovered by beautiful dark arrangements. It sometimes appears to be a little bit neo-classical like (cf. “March”) while the vocals and music together result in a truly ballad-style (cf. “Heaven”).

Conclusion: “Catharsis Of Rhetorik” is a well-conceived merge between gothic elements and ethereal influences. It all sounds like a dark, but delicate sonic caress.