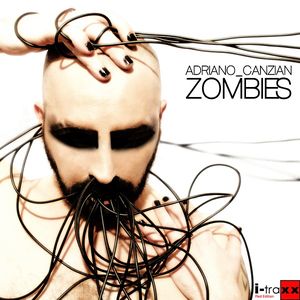 Content: Adriano Canzian is an Italian techno producer who gained some popularity after getting signed to International Deejay Gigolo Records. He later on released an impressive number of productions (mainly EPs) and his 2nd full length album by Space Factory. Adriano Canzian now strikes back with a new opus released by the Spanish label I-Traxx.

The album features 15 songs. Those who are already familiar with the work of the artist will not be surprised to discover his minimal approach mixing techno and EBM. It clearly does not sound like an average and typical techno sound as Canzian explores the darkest and pure underground fields of techno music. He injects crashing sound treatments and EBM components to accomplish his composition. The first part of the work is not only minimal, but rather repetitive and not that elaborate. Adriano Canzian clearly avoids complexity preferring to focus on the power of sound creation and sound manipulation. The dark element of his work makes it all a bit spooky like and I guess I never heard a similar ghost-like techno music.

Quite progressively the album moves towards heavier sound manipulations and EBM components. “Screaming Into Water” is an absolute smasher in the genre while carried by monstrous sound treatments. “Confessions Of A Dangerous Mind“ is another great cut in the genre. The track is carried by a solid bass kick while some new ghost-like elements join in. The spooky touch of this work is really fascinating and sounds like a wink to some ambient-like productions. It has been masterly mixed with the minimal electro-technoid-body sound, which became the trademark of Adriano Canzian.

One of the other potential hits is the heavy and pure industrial-technoid-minded “Anesthetized Sheep” which will hold you in its grip for more than 7 minutes. This is a real heavy blast of minimalism. I also have to mention the final cut entitled “Zombies The Ending” featuring Equitant and Anna Patrini. Patrini is a female vocalist with whom Canzian already worked with on his debut album “Metamorphosis” and who is a member of the band Skinny Patrini. Equitant is more familiar to lovers of minimal-EBM and a longtime Side-Line favorite artist. “Zombies the Ending” is a totally weird and somewhat experimental piece. Notice by the way that the intro-like cut is also featuring Equitant.

Conclusion: “Zombies” stands for an obscure and ghost-like techno voyage, which will appeal to lovers of minimal EBM as well.