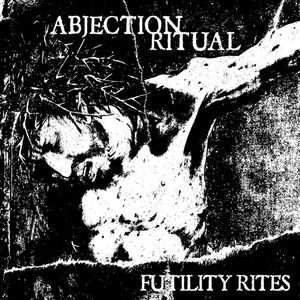 Content: “Futitly Rites” is the first official CD by this Pennsylvanian based project. After 2 self-released productions Douglas Corey joined hands together with the Malignant Records family to unleash this deadly opus featuring 8 cuts.

From the very first seconds you feel like you are entering a total sound inferno made of harsh noises and screaming vocals. We move through endless corridors of sonic mayhem where dense layers of sonic obscurity bring you under control. This is a paranoiac universe filled by dark- and other steal like noises. The composition is distorted and accomplished by overwhelming, monstrous sound manipulations. “Futility Rites” sounds like it is embracing the flames of hell, but you first will have to endure the cold blasts of death.

A few passages have been driven by echoing drones. This cadence remains pretty low and rather appears like an extra noise input to get the global production even more tormenting like the imaginary sensation of a poltergeist. “Futility Rites” something reminds me of the uncatchable universe of Brighter Death Now although it’s not that noise- and chaotic minded.

Abjection Ritual also focuses on multiple sound manipulations, which come through in a few, cool stereo effects (cf. “Tabernacle Of Teeth And Tongues”) and a global impressive production. You might get the impression that it is all about improvisation, but I can’t get away from the idea that this album is a well-thought and meticulous composition in the genre.

Conclusion: This is not the most accessible format of industrial music, but experienced listeners will certainly appreciate the magic of this work.

Since you’re here … … we have a small favour to ask. More people are reading Side-Line Magazine than ever but advertising revenues across the media are falling fast. And unlike many news organisations, we haven’t put up a paywall – we want to keep our journalism as open as we can. So you can see why we need to ask for your help. Side-Line’s independent journalism takes a lot of time, money and hard work to produce. But we do it because we want to push the artists we like and who are equally fighting to survive. If everyone who reads our reporting, who likes it, helps fund it, our future would be much more secure. For as little as 5 US$, you can support Side-Line Magazine – and it only takes a minute. Thank you. The donations are safely powered by Paypal.
Tags: Abjection Ritual