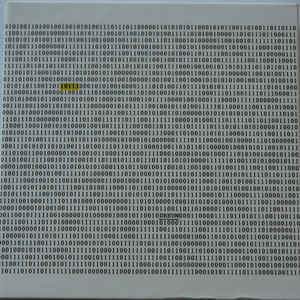 Background/Info: This release by Dreun is a new chapter in the Belgian NeuMusik-series. Behind this ambient project is hiding Joost Carpentier. Maybe his name doesn’t ring a bell, but the guy is involved with multiple projects. I know him from Jovica Storer, but he’s also involved with Sjoko, Cycles Of Moebius ao. He also has his own label (c-o-l-o-u-r-s). “10111” is a complex, but fascinating project about binary codes, which is reflected in the title of this album and all track titles.

Content: “10111” is the binary code for the number 23; like the number of tracks featured on the album. You’ll enter a fascinating sound universe, which is mainly inspired by a soundscape format although revealing a few more influences, which can appear from track to track. While the very first cut has something ‘pure ambient’-like most of the cuts are darker and definitely mysterious.

The work was accomplished by field recordings and numerous studio effects and tricks. You now and then will notice incoming, slow rhythms. Sometimes very relaxing, but sometimes also obscure and ghost-like “10111” has a lot to reveal.

+ + + : This is a somewhat crazy, but fascinating concept. The binary codes reveal a complex universe, which has been transposed into music by Dreun. The great artwork of this box is totally devoted to the concept and only accentuates the complexity. Sound-wise the listener will enter into endless universe of obscure sound corridors. It has something spooky-like, which you better can experience by using headphones so you can distinguish all little noises and details. The tracks sound like pieces belonging to a bigger entity, but I however have to mention the more elaborated “10110” featured at the third disc and, which has something Vidna Obmana-like.

– – – : Four discs are quite a lot to listen to and especially in one shot. Several cuts are pretty similar like and sometimes too long. I once more have to say the artwork is great and totally in the line of the concept, but at the other side is also is a truly Chinese puzzle to find the info about artist, tracklist etc. Therefore the inside booklet is an essential tool.

Conclusion: This is without a shadow of a doubt the weirdest and most fascinating release in the ‘Belgian NeuMusik’. A great conceptual work filled with sound experiments and dark atmospheres.