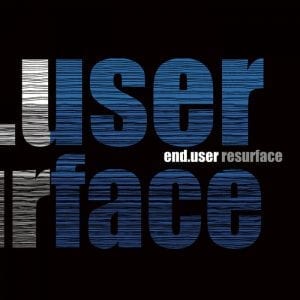 Background/Info: American artist Lynn Standafer has already been active for numerous years now under the End.user moniker. He released an impressive number of works on respected labels such as Hymen Records, Ad Noiseam, Ohm Resistance and of course Hands. This new work rather appears to be a mini-album of 7 tracks instead of an EP.

Content: End.user hasn’t really changed its good-old sound formula, which remains inspired by the dynamics of d’n’b. It also sounds like a dark and industrial format while the heaviest cuts are more into breakcore.

One track is featuring 2methyl while another one features Trash.Eater.

+ + + : End.user sounds a bit apart from the ‘standard’ Hands bands. But d’n’b and industrial music have some common elements and especially in the ‘violence’ of the production. It also remains a dark production carried by terrific low, blasting sounds. But the work also reveals a few subtleties such as refined sequences. I here refer to the somewhat “X-Files” tune running through “Cracked Mirror” feat. Trash.Eater. I also like the track made together with 2methyl.

– – – : You really have to like the main ingredients of d’n’b to enjoy this work.

Conclusion: End.user is the kind of project appealing to a very diversified audience. It makes the strength of this new work, but also the main particularity. It’s hard to say if this band is really into ‘industrial’, but it will appeal for some lovers.