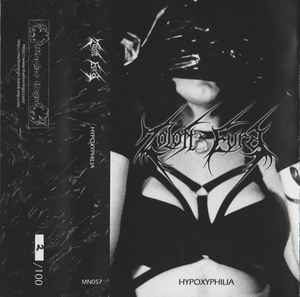 Content: “Hypoxyphilia” features 3 cuts, which are now reminding me of early 80s experiments and then evolving towards more familiar dark-ambient fields featuring a truly horror-vision. The noise aspect is present, but rather as an influence instead of real noise release.

+ + + : What I especially appreciate with these kinds of bands is the truly minimal- and underground approach. Even if the work is available on digital platforms, the cassette format, which remains something physical you can touch, is pure underground like and limited to 100 copies. But it’s not only about an underground approach; Zoloft Evra still composes a very obscure sound, which might be intended to disturb their listeners. There clearly is a noticeable visual aspect emerging from the music and especially from “Blood Stained Misogyny”. Last, but not least I also want to say a word about the artistic package of this cassette, which only accentuates the obscure side of the band.

– – – : I regret this production only features 3 cuts, but that’s precisely what you might expect from a so-called EP. I personally prefer the dark-ambient side instead of the more experimental aspect of the work, which mainly comes through on the opening track.

Conclusion: Zoloft Evra seems to find their inspiration in the darkest and maybe most perverted corners of mankind… or how do we have to understand the title of this work referring to ‘autoerotic asphyxiation’!? It creates a tormenting sonic experience, which is exactly what lovers of this music genre are begging for!

Since you’re here … … we have a small favour to ask. More people are reading Side-Line Magazine than ever but advertising revenues across the media are falling fast. And unlike many news organisations, we haven’t put up a paywall – we want to keep our journalism as open as we can. So you can see why we need to ask for your help. Side-Line’s independent journalism takes a lot of time, money and hard work to produce. But we do it because we want to push the artists we like and who are equally fighting to survive. If everyone who reads our reporting, who likes it, helps fund it, our future would be much more secure. For as little as 5 US$, you can support Side-Line Magazine – and it only takes a minute. Thank you. The donations are safely powered by Paypal.
Tags: Zoloft Evra