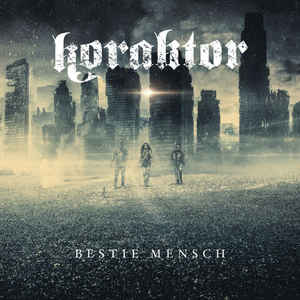 Background/Info: Koraktor is a Swiss trio hailing from Zürich. After having self-released the debut album “Nacht Bilder” in 2010 it took them many years to strike back, unleashing their official debut full length on Danse Macabre.

Content: Koraktor is what I would call a ‘typical’ formation for German speaking music lovers. The German lyrics together with a rather passionate and somewhat theatrical way of singing are quite recognizable and sometimes reminding to Das Ich. Sound-wise “Bestie Mensch” reveals heavy, epic-like arrangements. These songs are somewhat related to the softer side of Rammstein.

+ + + : “Bestie Mensch” is the kind of work Germany and other German speaking countries will adore. It’s not innovating, but in the purest tradition of heavy gothic and epic music. There’s a real solid part of drama emerging from this work, which also reminds to soundtrack music. The songs are well-crafted and achieved with moody atmospheres. The guitar- and electronic parts are complementarily. I especially recommend the “Masken”-song, which has an elevating effect.

– – – : Despite of the good production, this is the kind of work that doesn’t bring anything new. The songs become a bit predictable after a while I’m also missing a few potential hits.

Conclusion: “Bestie Mensch” is a well-crafted and mature opus, but without real surprises.