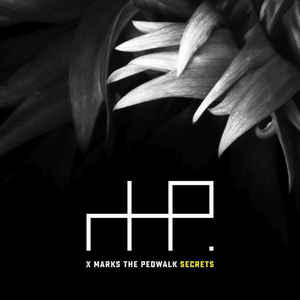 Background/Info: X Marks The Pedwalk became one of the main EBM formations during the 90s and struck back in 2010 after a break of 15 years. The second life of the band set up and driven by Sevren Ni-Arb is quite different in sound and influences, XMTP becoming more pop-minded and experimenting with ambient atmospheres. “Secrets” is the ninth album to date and the fourth one since the band’s return. “Secrets” also is the first XMTP work on the band’s very own label Meshwork Music.

Content: I think to might say that “Secrets” moves on there where previous albums stopped. We get a rather similar electro-atmospheric composition empowered by harder elements, which might remember the EBM past of the band, and achieved with pop ingredients. XMTP is first of all electronic, but doesn’t really belong to one specific genre.

The main evolution on “Secrets” is the more important role of Estefania. She’s doing the female vocals since the 90s, but never became the main singer. It now seems to be the other way round. Sevren Ni-Arb is still singing and especially on some harder cuts, but there clearly is a noticeable move about the vocals.

“Secrets” is mainly featuring well-crafted songs filled with reverie and sometimes a bit soundtrack-like (I mainly refer to the instrumental last cut), but still has a few more danceable and harder cuts.

+ + + : Sevren Ni-Arb was a talented EBM composer and a genius producer when it comes to EBM and dark-electronics, but since the comeback of the band he never stopped to increase his composing skills for atmospheric electronics and pop arrangements. The songs are well-crafted, characterized by a great progression, carried by solid bass lines and great synth leads. “Secrets” is a varied work, but the songs are complementary.

– – – : If you compare the work from the 90s with the releases since 2010 there clearly is a serious hiatus about sound, influences and even image. I sometimes get the impression we’re no longer talking about the same band and now and then I’m missing the early, darker side of this band. I’m mainly missing their ‘power’ and that was never that present as on “Secrets”.

Since you’re here … … we have a small favour to ask. More people are reading Side-Line Magazine than ever but advertising revenues across the media are falling fast. And unlike many news organisations, we haven’t put up a paywall – we want to keep our journalism as open as we can. So you can see why we need to ask for your help. Side-Line’s independent journalism takes a lot of time, money and hard work to produce. But we do it because we want to push the artists we like and who are equally fighting to survive. If everyone who reads our reporting, who likes it, helps fund it, our future would be much more secure. For as little as 5 US$, you can support Side-Line Magazine – and it only takes a minute. Thank you. The donations are safely powered by Paypal.
Tags: EBM, X Marks The Pedwalk, XMTP