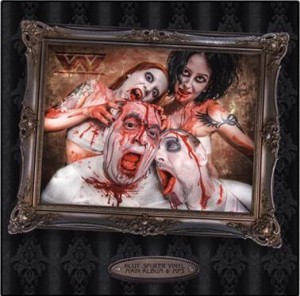 Despite of what some electro-heads affirm, :Wumpscut: remains one of the absolute leaders of so-called dark-electro music. The compositions became quieter and more intimate, but can we really expect an artist repeating himself? After the release of the 19th studio album “Blut Spuker Tavern” (you can order it here) we asked a few questions to Rudy Ratzinger.

SL: Rudy, what can you tell us in a few words about –the idea behind “Blut Spuker Tavern”, -its writing and global production –and last, but not least about the artwork, which has been always an important item?

:W: As usual: a collection of 10 songs from September to November. I didn’t want to create something super super serious about vampires, so it became quite ironic. This time, the graphics/pictures were done a long time before audio.

SL: The earlier work of :Wumpscut: was more into power and hard songs while your latest releases sound more intimate and quieter. How do you analyze your own evolution as musician throughout the years to finally reach this ‘intimate’ style?

:W: I don’t think about creating :W:, but of course, there are some changes – like in life, too. I simply am not interested in running on the left track of an highway all the time and at maximum speed.

SL: The “DJ Dwarf” series became more and more important throughout the years and has been always a ‘platform’ for less familiar bands to remix the work of :Wumpscut: What do you keep in mind of this ‘series’ and what can you tell us of the newest volume (n°15)?

:W: If you let people create something new from your sources, the biggest and most pleasant surprises come from unknown artists, most of the time. No need for big names which always sound the same. In MY ears, at least. The DJ Dwarf/the Dwarf in general is essential for each release, I think.

SL: I noticed that you mentioned “Blut Spuker Tavern” as being the second last album! Does it mean that you see the end of :Wumpscut: coming nearby? And how do you imagine yourself as an artist after :Wumpscut:?

:W: Time will tell, time will tell. I don’t care about being an artist. More like a craftsman.