Interview of Seba Dolimont (one of the Alfa Matrix owners) 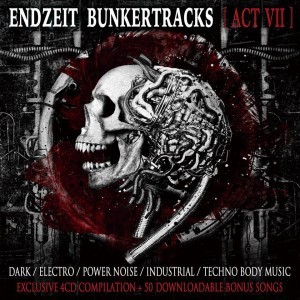 SL: What means the “Endzeit Bunkertracks”-series to you and what makes the success story of it?

Seba. Well… Releasing the 7th volume now of this compilation series is quite amazing and something I did not even expect the day I came up with the idea of this sampler back in 2005!  7 editions in 10 year time. That’s a lot when you consider the time it takes to listen to all these submissions that we get and replying to every single submission with positive or negative feedback. That’s the least we can do!

The success of this compilation series is for me nothing but the result of all these great artists who have each taken part to this sonic adventure with their great music.  Add to this the collaboration with several great designers for the artwork design of the carton box and its extended booklets. My personal contribution is strictly limited to the selection of all these bands and songs and always doing my best to keep the quality level constant in my selection and focusing on diversity within a defined music genre.

What I still find the most unexpected part of this “Endzeit Bunkertracks” adventure is that in the early years of Alfa Matrix we were often seen as a ‘synth pop’ label signing mostly female fronted bands. And then we surprised everyone when signing the first ‘black sheep’ from the label roster: Dunkelwerk! And it’s after an interesting discussion with Losttrooper of Dunkelwerk that came the idea of doing a concept compilation devoted to the dark side of the electro scene.  “Endzeit Bunkertracks” was born… the rest is history and meanwhile we added a few more bands in that genre to our label family but not only ;))

SL: 118 songs and bands have been selected! Do you’ve any idea how many bands contacted you for this compilation and, which are your main criteria to get featured on it?

Seba: That’s the difficult part of the story I would say! The success of this comp makes that it becomes a dream for a lot of young dark electro bands to be some day part of an “Endzeit”-comp!  It’s also under the constant pressure of bands and fans that we decided to activate this 7th edition.  Every volume we issue, we get more and more songs submitted to us!  We got over 2500 songs submitted for this new edition!  It can sound a lot for you, but when you know we end up with 118 bands and that many submit more than 1song at a time… you are rapidly there!  I am always surprised that there are still so many bands to discover around!  This is the exciting part of the job. It also means listening to a lot of songs that I personally did not like or from bands who still have to work to reach the correct production quality level… We also get songs submitted which do not fit the comp’s concept. Now there is no predefined recipe of success to be selected on an “Endzeit Bunkertracks”-comp! The red line for me is that the song needs to touch me in some way. I actually select songs through several preselection phases – shrinking the number of chosen songs until I have enough to fit on the comp!  This is always a quite frustrating moment cos I usually have to discard some great artists to make it all fit!  But then I keep an eye on these bands for a potential future edition. The way I do the final selection is a bit like a DJ work.  I pick them, song by song, and create the feel & atmosphere I want to give to each disc.  It’s a continuity of a DJ set for me.  And once the 4 discs are full, I move ahead with the bonus card which I forced myself to limit to 50 songs.  I always enjoy mixing established acts and totally unknown bands and I also give favor when possible to previously unreleased songs/mixes.  But above all, this comp represents my personal tastes of the moment in the “dark electro” spectrum.

SL: I’ve been surprised to see some of Alfa-Matrix’ leading bands like Ayria and Unter Null getting featured on the download card instead of the disc(s)! Is this a kind of strategy to promote the digital side of the compilation and the label?

Seba: Not really! Like I said I give priority to previously unreleased songs. So when a band – from the  Alfa Matrix roster or not – gives me already released songs – they have little less chance to be on the final track list. Some of our label bands also simply did not make it to the final selection you know! But then, still doing my DJ set selection exercise, at some point I only have 68 spots on the CD’s… When these bands/songs did not pop out in my playlist, they can show up on the bonus tracks.  For me all these songs are part of the whole compilation box.  It’s a non-stop set of 118 bands & songs! So yes some of our bands ended up on that bonus card, and some can be amongst our bigger acts like Ayria, Unter Null,  Mentallo & The Fixer, Tamtrum, Suicidal Romance, Studio-X, etc. What counts is that they are part of it.  I make no difference between bonus digital tracks or featured on the disc… You know, this time we even decided to make these 50 bonus songs available for download via our Bandcamp page.  This gives us the opportunity of offering these bonus songs for FREE to anyone, included those who did not buy the physical box.  The aim of such compilation box series that we run at Alfa Matrix is above all giving exposure to all featured bands.  I know that this comp gave lots of opportunities to a bunch of bands on the dark elektro scene, opening them new doors, giving them the chance to sign to labels, etc.  This new approach offering also the bonus songs in FLAC quality is another step forward in that direction: putting all these great bands in the spotlight and giving them some more chance to be heard and discovered. Cos we cannot as a label, sign all bands we find good cos we are limited and already have a quite large active roster of artists and a quite busy release planning for the next months!

SL: There’re a lot of new and promising bands featured on “Endzeit Bunkertracks”, but are there some bands on it, which will soon join the ‘matrix’? What might we expect?

Seba: For every volume of our compilation box series, there have often been new discoveries that we made and some ended it up in a closer collaboration with some bands indeed! And yes there are definitely  some artists I discovered here or had the opportunity to talk with during the selection who I will continue following closely and only time will tell if more will be possible together or not.  You know, sometimes there are bands that I follow for several years before considering working with them.  Some bands also keep knocking at our door release after release they make and sometimes I have seen the gates of the Matrix opening at most unexpected moments ;))  I will not tell you now those I’m currently spotting of course, but what I can tell you is that we have a few new Alfa Matrix label signings featured on this new “Endzeit 7”-sampler who will all release something later this year… I think of Venal Flesh from Washington/USA who come with a very own atmospheric style of rhythmed dark elektro. I was happy hearing some DJ’s telling me we had signed our next Unter Null (laugh)!  Also from America, we have the very promising act Entrzelle who are a kind of darker version of Rotersand meets VNV Nation. A style we had not yet on our label!

You will also notice that we signed the Belgian band Llumen. I have been in touch with Pieter for more than 5 years now.  I have seen him grow as an artist, reaching the maturity moment to release his debut album soon. A CD that will please all fans of Assemblage 23 with the Belgian seal of quality on top! Last but not least, like you wrote it in your recent review of this comp on your great website, the cult dark elektro  from the early 90’s The Psychic Force also joined the ‘Matrix’ some months ago and are presenting their first all new song to the world on this new “EB7”-compilation – a first appetizer announcing a strong come-back! It’s just amazing that these guys have been silent for so long. So after bringing back some good old legends on the forefront of the scene like Leather Strip, AmGod, Pouppée Fabrikk, Armageddon Dildos, PNE, Mentallo & The Fixer, well, The Psychic Force are our next victims for the ultimate pleasure of your ears!

Thanks a lot for this interview and above all, for all these new bands you made me discover through the many tips you gave me throughout these 7 volumes of “Endzeit Bunkertracks”-extravaganzza!