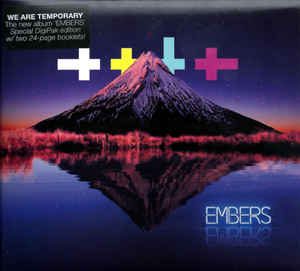 Background/Info: Brooklyn based We Are Temporary took me by surprise on the first official album entitled “Crossing Over”. Miles away from the usual and boring electro-pop clichés the project driven by Mark Roberts revealed an own approach in electro-pop made of intelligence. The artist is now back on track unleashing “Embers”.

Content: The very own approach in writing electro-pop like songs hasn’t changed. “Embers” deals with a refreshing pop format, which sounds more into reverie instead of dance music. It often gives me a ‘feel-good’ feeling although I noticed a few cuts, which are more into drama. “Embers” has it all and once again seduces by refined bleeping treatments and well-crafted compositions.

+ + + : When you already know the band, you can’t get a similar surprise as on “Crossing Over”, but the music again reveals a clever approach characterized by an own sound DNA. It’s a clean and polished production driven by sensual vocal parts. The songs progressively build up without ending into a complex format. I especially enjoyed the somewhat mysterious and even esoteric-like “Echoes” while I also have to recommend “Medication”, which moves on crescendo and features cool female backing vocals. The digipak format is cool and hypnotic.

– – – : Speaking for myself I definitely prefer the debut album. Maybe it all was because I just discovered this band, but I got the feeling there were more highlights on the previous work. This new work is maybe a little less too sweet.

Conclusion: I like the spirit running through “Embers”, but I’m missing an appropriated body… Don’t get me wrong, this is cool and elegant electro-pop, but it might sound a little less raw and naughty.

Tags: We Are Temporary